The United States Mint has started accepting orders for the fourth release of the year for the First Spouse Gold Coin series. The coin features Frances Cleveland, who actually makes her second appearance within the series. Since her husband served as President during two nonconsecutive terms, under the Presidential $1 Coin Act, two separate Presidential Dollars and two separate First Spouse Gold Coins are issued. 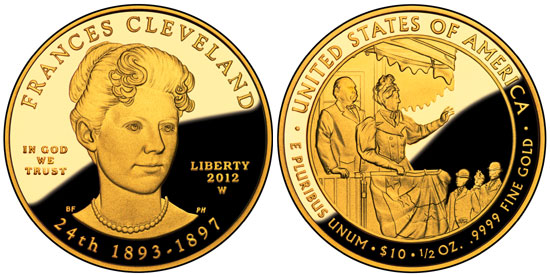 The Frances Cleveland (Second Term) Gold Coin features a portrait of the First Lady designed by Barbara Fox and sculpted by Phebe Hemphill. The inscriptions read “Frances Cleveland”, “In God We Trust”, “Liberty”, “2012 W”, “24th”, and “1893-1897”. The reverse design of the coin was designed and sculpted by Joseph Menna and is intended to be emblematic of Mrs. Cleveland’s popularity with the public. Inscriptions include “United States of America”, “E Pluribus Unum”, “$10”, “1/2 oz.”, and “.9999 Fine Gold”.

The United States Mint offers both proof and uncirculated versions of the coin. The maximum mintage has been established at 13,000 pieces with the ratio of proof to uncirculated coins to be determined based on customer orders. There are no household ordering limits imposed.

Pricing for the coins is $1,004.00 for the proof version and $991.00 for the uncirculated version. This pricing will be subject to potential weekly adjustment based on the average weekly market price of gold.

Orders for this coin may be placed online at http://catalog.usmint.gov/