The Central Bank and Financial Services Authority of Ireland will issue (10th October) the second coin in their ongoing “Barnyard” series, re-creating the iconic circulation coins featuring animals designed by artist Percy Metcalfe and appearing on Irish coinage from 1928 to the introduction of the Euro in 2002. Percy Metcalfe’s original designs are replicated and have been re-tooled and sharpened slightly for more vivid detail. The additional inclusion of the younger animals is the work of artist Emmett Mullins who has designed several collector coins for the Central Bank including the last barnyard issue. 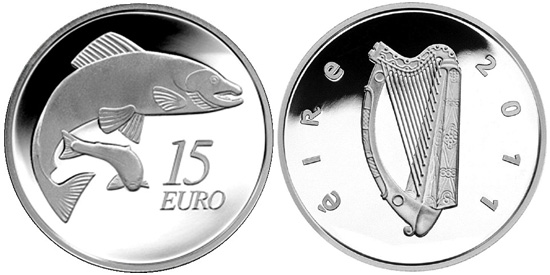 The second coin features the salmon, the design which originally appeared on the two shilling and later the 10 pence denomination. The salmon, like the first issue in this series (Horse and colt) is now joined by its offspring, a smolt – symbolising the second generation in the monetary history of Ireland, as a member of the Eurozone. The reverse design depicts Ireland’s national symbol, the harp along with the text “EIRE” and the year of issue, 2011.

The coin is denominated as 15 EURO and will be struck in sterling silver to proof quality with a diameter of 38.6 mm and a weight of 28 grams. The coin will have a mintage limit of 15,000 pieces and it is expected that there will be great demand for this coin after its issue date in October.

The collector coins division of the Central Bank confirms that there is a very small quantity of the Horse & colt issue available which was released in October 2010. The Irish wolfhound with pup is scheduled to be the last in the series in 2012.

For more information on this and other coins issued by Ireland’s Central Bank, please visit the website of the Central bank and Financial Services authority of Ireland at: http://centralbank.ie