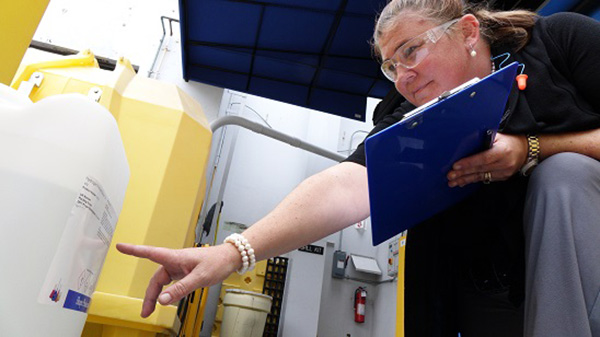 The U.S. Mint’s Office of Corporate Communications has shared the following release:

“We have several sustainability efforts ongoing in San Francisco,” said Dave Jacobs, San Francisco plant manager. “Every action that we do, we take into account how it will impact the air, impact the land and impact the water.”

“A great benefit to cutting down water usage was that here in California, we’re in a drought,” Turner said. “Everybody’s concerned and everyone wants to conserve as much water as possible.”

As a result of the team’s efforts, water consumption in the chemical washroom was reduced by over 90 percent. This resulted in an overall building water consumption reduction of 42 percent and an average of 126,785 gallons per month, saving approximately $2,215 per month. California has been going through an extreme drought this year and efforts like this not only save the Mint thousands of dollars and eliminate potential employee exposure to chemicals, but the work benefits the community as well.

“With the alcohol, what that did was to help with the ‘greening’ part of our environment,” Turner said. “They’re reducing the use of alcohol, which also, in turn, reduced one of our air components so they were able to eliminate that element.”

San Francisco also eliminated their chrome plating shop and replaced it with a much more environmentally friendly process. This process greatly decreases the amount of toxic chemicals employees have to face for the chrome plating process.

Another key effort was the United Stated Mint at San Francisco acquired ISO 14001 certification in May. The Mint was found to be in conformance with all the provisions of this standard, to include the Environmental Management System. Examples of these provisions would be environmental reporting and documentations regarding environmental targets, aspects and impacts, legal requirements and permits, and environmental management processes and plans. The scope of this certification includes all operations and activities of the plant. With the certification, all Mint manufacturing facilities are now ISO 14001 certified.

“It is a statement saying we are meeting the environmental standards that are required,” Turner said. “Within the ISO, they take into account what state you’re in—California being one of the most restrictive—so it does present that challenge.”

Turner said another key effort has been the facility’s increased adherence to “green” purchasing.

Jacobs said getting employees to see the benefit of environmental efforts wasn’t hard because employees are already at home recycling and saving water.

“What’s unique about our efforts is the process actually started away from work,” Jacobs said. “In California, there are a lot of restrictions to begin with. We’re in the midst of a drought right now, so employees are required to save water at home. Selling the idea of sustainability to our employees wasn’t an issue; they actually already owned it.”