The Central Bank of Samoa have unveiled (22nd June) their new series of circulation coins which will be introduced later this year. The coins represent a complete change in the composition, design and specifications from the Samoan coinage issued with the introduction of the Tala currency in 1967. 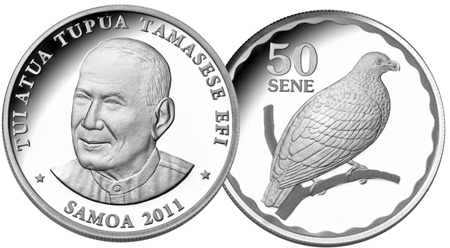 At a ceremony held at the Royal Australian Mint in Canberra, Assistant Treasurer, the Hon Bill Shorten MP and the High Commissioner of Samoa, representing the Government of Samoa, were invited onto the factory floor to strike the brand new Samoan coins. The Central Bank of Samoa had announced earlier in April that they would be making major changes to its currency as the Central Bank had come to the conclusion that the 40-plus year old coins, which were a legacy of the Pound – shilling- pence monetary system, had lost their appeal and relevance. The Royal Australian Mint has designed and produced the new series of coins that are both low in production cost and reflect a more modern Samoa.

The Royal Australian Mint itself had undergone major changes and significant upgrades to its facilities and technology in 2009. The contract to supply the Central Bank of Samoa is one of the Mint’s first large-scale international jobs since the overhaul. The RAM states that it now has the capacity to accept contracts from other countries without encroaching significantly into its normal, day-to-day functions.

To mark this significant change in Samoan coinage, the Royal Australian Mint have produced a proof set in fine silver with a limited mintage. The 5 coin set will consist of the 10, 20 & 50 Sene denominations and the one and two Tala denominations. The Two Tala denomination will be introduced into everyday circulation for the first time with this new series.

The collection is available from today and can be reserved from the Mint’s Call Centre (for Australian residents) and online on the Mint e-Shop for international collectors at: www.ramint.gov.au