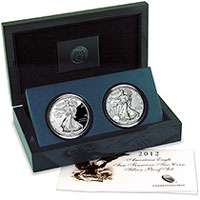 Each set contains two American Silver Eagles struck at the San Francisco Mint and carrying the “S” mint mark. The first coin is struck with a cameo proof finish, with frosted design elements and mirrored background fields. The second coin is a reverse proof, with mirrored design elements and frosted background fields. The US Mint has previously included reverse proof Silver Eagles within special sets issued for the 20th and 25th anniversaries of the program.

Rather than establishing a specific mintage limit for the 2012 San Francisco Silver Eagle Set, the US Mint decided to accepted orders only during a limited period and then produce the sets to meet demand for all orders placed.

Through July 3, sales have reached 217,351 sets according to the “sales odometer” that the Mint has placed on the product page. This amount far exceeds the 100,000 mintage limit established for last year’s 25th Anniversary Sets, but still remains below the 250,000 limit for the 20th Anniversary Sets issued in 2006.

The San Francisco Silver Eagle Set is priced at $149.95 and may be ordered online at http://catalog.usmint.gov/