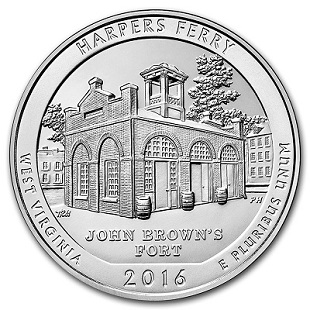 Sales of the 2016 Harpers Ferry 5 oz. silver bullion coins crossed the 35,000-units mark yesterday after the Mint reported that 500 pieces have been added to the issue’s overall total. Taken with last week’s addition of 400 coins, the Harpers Ferry bullion coin mintage has risen by 900 is less than two weeks to arrive at its current figure of 35,100 units.

This means that 2016’s overall total for America the Beautiful 5 oz. silver bullion coins now sits at 215,100 pieces, which is the second-highest quantity realized since the ATB series was launched in 2010.

The recent sales of this issue are a bit unusual, as the Mint had not sold any for about two months following the initial sales rush that accompanied their debut. It is also interesting because the Mint is set to launch the Theodore Roosevelt National Park 5 oz. bullion coins this coming Monday, on August 29.

The Harpers Ferry National Historical Park design is the 33rd in the America the Beautiful quarters series. The ATB program will highlight a total of 56 national parks, forests, and historical sites in the order they were recognized by the federal government, with the final release in the series scheduled for 2021.