The Danish Royal Mint, on behalf of the Landsbanki Føroya (Governmental Bank of the Faroes) have organized the retail sale to collectors of their current series of banknotes. The sale which commenced on the 10th April is direct to the public and is handled through the Royal Danish Mint’s website who have listed all five denominations ranging from the 50 to the 1000 Kronur banknotes.

The Faeroe Islands or Føroyar, is a group of 18 main islands which is located about 230 miles north of the Scottish mainland which is a self-governing territory or commonwealth of the Kingdom of Denmark. Faroese banknotes have been in circulation since 1940 and attained parity with the Danish Krone in 1949, inter-changeable at an equal 1 to 1 rate. The Faroese krone does not have an ISO currency code of its own but instead uses the designated code for Denmark, DKK.

The current series was introduced into circulation from 1999 to 2005. Updated versions of this series were issued on the 19th March with new and improved security features. The series highlights watercolor scenes of the Faeroe Islands by the artist Zacharias Heinesen (born 1936 in Tórshavn) a noted Faroese landscape painter whose other works have appeared on stamps and medals.

Depicted on the obverse side of the notes are various images of indigenous wildlife found on the islands. The reverse features specially commissioned watercolor scenes of natural landmarks and coastal towns & typical settlements found all over the islands. 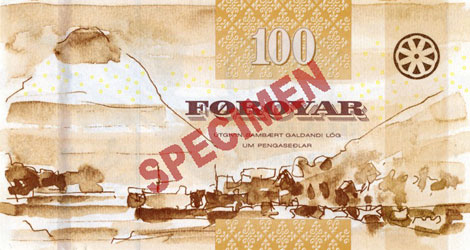 Improved security features have been integrated into the new series. A new holographic “motion strip” which is segmented into the security paper is located on the right edge half of each note. They are color coordinated to the specific dominant color of each denomination. An aligned-print application of a circular pattern is positioned at the upper left corner (as seen from the obverse) All notes have a ram’s head watermark which is seen on the left side and just below the aligned print application. A color coordinated iridescent strip is located on the reverse and positioned towards the right half and near the edge.

Faroese banknotes are highly sought after as they are issued in very small quantities and are infrequently seen in the usual banknote & currency exchange outlets. The Royal Danish Mint has advised that this series has had a very steady level of sales since they were launched. Interested collectors can add these beautiful notes to their collection by visiting the website of the Royal Danish Mint and placing orders through their retail section. The notes are sold at face value, a surcharge applies for ten or more notes plus postage charges.

Banknote images are very kindly provided to the office of LBMRC UK by the Danmarks Nationalbank for the purpose of re-illustration.