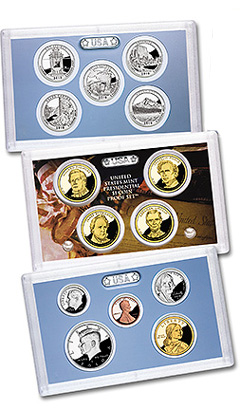 The United States Mint is scheduled to conclude sales for various 2010-dated annual sets on December 30, 2010 at 5:00 PM ET. As such, this week will be the last opportunity for collectors to purchase products such as the 2010 Proof Set, 2010 Silver Proof Set, and 2010 Uncirculated Mint Set directly from the Mint.

According to the most recent sales figures, the US Mint has received orders for 1,100,602 of the 2010 Proof Sets. This is likely to represent the lowest sales total for the annual proof set in decades.

The 2010 Silver Proof Set originally went on sale at the Mint on August 26, 2010. These sets contain the same fourteen coins found in the standard set, however the dime, half dollar, and quarters are struck in a composition of 90% silver. During the turbulent year in precious metal prices, sales of this product were suspended on several occasions. The price of the set was increased from the original $56.95 to the current $64.95.

The 2010 Uncirculated Mint Set originally went on sale July 15, 2010. Each set contains a total of 24 coins, comprising the fourteen different coins mentioned above struck at the Philadelphia and Denver Mint facilities. These coins carry a special satin finish, which differs from the standard circulation strikes. Starting with the 2011-dated sets, the satin finish is no longer utilized by the US Mint for the annual sets.

The US Mint has recorded sales of 581,308 of the 2010 Uncirculated Mint Sets. This is likely to represent the lowest sales total for the annual uncirculated mint set in decades.

In addition to the three top selling sets, the US Mint will also conclude sales for the 2010 Presidential Dollar Proof Set, containing only the four Presidential Dollars in proof format, as well as the 2010 America the Beautiful Quarters Proof Set and 2010 ATB Silver Proof Set, which contain the five quarters in standard and 90% silver composition.

Until the conclusion of sales on Friday, December 30, 2011 at 5:00 PM ET, orders for these set may be placed online at http://catalog.usmint.gov. Sell outs at an earlier date are possible, depending on US Mint inventory levels.