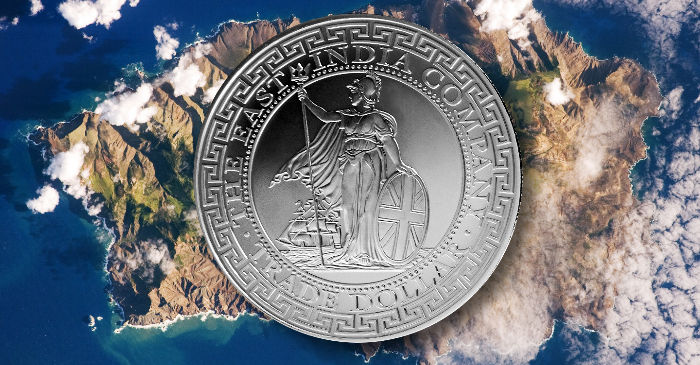 The government and treasury of St. Helena, in association with the East India Company, have issued their first silver bullion coin which is in tribute to Great Britain’s famed trade dollar — once the best known silver coin in Asia. This is the first coin which has been commissioned by the East India Company to be issued exclusively as a bullion-related coin.

Declared legal tender on the 2nd February 1895, the British trade dollar came about by an Order of Council of the Straits Settlements, Hong Kong, and Labuan. The 26.95-gram coin of 90-percent silver would be quintessentially very British in terms of its stately allegorical motif — a representation of Britannia — and for its use primarily in Asia.

Designed by the eminent engraver George William De Saulles (1862–1903) the coin would feature the figure of a standing Britannia, with a trident, British shield, and a merchant ship in the background. As the image of Britannia was sufficient to identify the coin’s issuer, the name of the country seemed unnecessary and, as such, there was no mention of Great Britain in text or legend. On the reverse, the Chinese character for longevity is surrounded by an arabesque pattern with the denomination written in both Chinese and Malay scripts. After the Straits Settlements dollar was introduced in 1903, the trade dollar was used in Hong Kong and extensively accepted on the mainland.

Due to greater political instability, increasing military campaigns between various nations in the region, and a worldwide depression in 1929, trade in Asia was on the decline and, as a consequence, the need to produce trade or commercial coins was also less required. With the Chinese nationalist government ordering the melting of silver dollars and banning their ownership in 1934, the fate of the trade dollar was sealed. It was discontinued in 1935, and on the 1st August 1937, the coin was demonetised — just over 80 years ago.

The coin includes many of the specific design details from the original trade dollar. The reverse side depicts the classic allegorical figure of a standing Britannia holding her trident in her right hand and a shield with her left hand which includes elements of the British Union Jack. A tall sailing ship is in the background, symbolising the international trade which these ships were carrying. The inscriptions EAST INDIA COMPANY and TRADE DOLLAR are placed above and below the primary design, which, in turn, is surrounded by a geometric frame.

The obverse side depicts an effigy of HM Queen Elizabeth II which was designed by engraver Jody Clark and is surrounded with the same geometric frame that is used on the reverse. The actual denomination of ONE POUND is seen under the effigy along with the year of issue.

The coin is available from the 28th February and includes pre-issue ordering. For additional information on this coin, please visit the website of Lucius Precious Metals (LPM) Group Limited.