The Saint-Gaudens Double Eagle series is one which is often associated with the 1933 Double Eagle, until recently the most expensive coin ever sold at public auction, when the sole specimen that is publicly in private hands sold for over seven million dollars back in 2002. The series, which was first struck in 1907 and ended with that famous 1933, has many more rare dates that may be less well known to some collectors. The king of those dates is without a doubt the 1927-D Double Eagle, of which one was sold by Heritage in their 2014 FUN auction held in Orlando, FL. The piece, graded MS-66 by NGC, realized $1,997,500.00 including buyer’s premium. 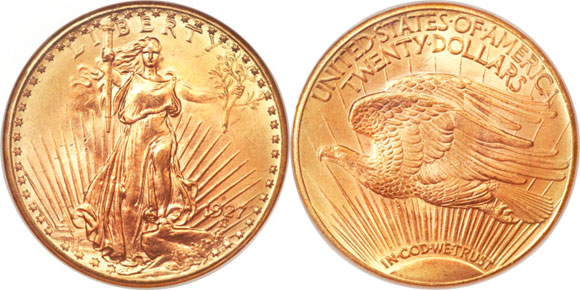 Novice collectors might go through any of the popular hobby guides and take a peek at the prices of rare coins, often associating them with the mintages listed. When such a collector glances at the 1927-D Saint Gaudens Double Eagle, he would be amazed to see valuations in the millions of dollars, yet a mintage of 180,000 coins is listed. While this is certainly low in the context of the series, it certainly does not warrant such a high price. Obviously there is more to the story, and numismatists know that the mintage is only the start. More important is the total of number of pieces that have survived, and the total number of pieces available to collectors. In the instance of the 1927-D Double Eagle those numbers are very low, with thirteen pieces known to exist (a few more are rumored but might be duplicates) and only nine in private hands.

The Double Eagle production in the 1920’s was interesting. Domestic demand for these pieces was low, and many were exported and used as payments to European banks. Because there were few collectors who could afford to purchase each and every issue from each Mint (despite the fact that they were available directly from the Mint for face value) most issues went unnoticed. When the Great Depression hit demand plunged even lower, and the thousands and thousands of double eagles that were still on hand at the Mint sat there. Later, in the 1930’s, many of these would be melted.

In the 1940’s collectors started to take notice of the rare dates. Dates such as the 1926-D and 1931-D were considered virtually impossible to find, and it was presumed that most had been melted. Then, starting in the 1950’s, the scene started to change. More and more examples of some of the rare dates started to turn up, coming from overseas sources, particular banks in countries such as France and Switzerland. Populations rose and while prices did too with increased demand, the rare 1920’s Double Eagles were no longer as difficult to find as had been the case only a few years before. However, there was one notable exception: the 1927-D. None were ever found in Europe, and it appears that none ever made the trip overseas like so many others issues. 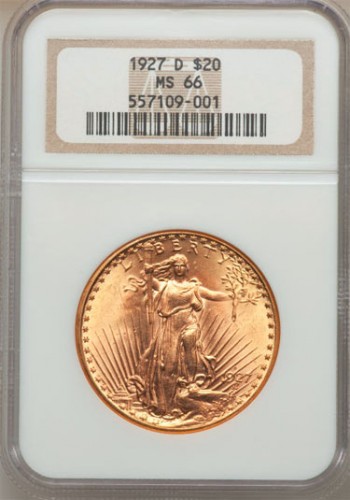 It appears that the entire mintage had been in storage at the Denver Mint. Even though the 1927-D Double Eagle was available at the Denver Mint for face value as late as 1932, few collectors cared or could afford the pieces. Virtually all were presumably melted later in the 1930’s, creating one of the major $20 gold rarities. In fact, after ten 1933 Double Eagles were found in a safety deposit box in recent times and others have been rumored to exist but are being kept in hiding, the 1927-D might have fewer survivors than the 1933.

The piece offered by Heritage is one of the finer known pieces, although a single MS-67 is known to exist as well. Most are graded GEM or better, further proving the point that these pieces never were shipped anywhere. The piece passed through the hands of several noteworthy collectors, including Dr. Steve Duckor, who sold this piece separate from other pieces of his collection in 1998, the last time it sold at auction. It realized $577,5000 at that auction, then went unsold in a 2001 Sotheby’s auction. It has not been offered for sale in a public auction after that date, although reportedly it traded hands numerous times since then. Very few 1927-D Double Eagles are offered in any given decade, and it might be quite some time before we will be able to report once again on an auction of what is considered the rarest 20th century coin issued for circulation.