More than a year after its initial discovery, the Saddle Ridge Hoard of buried treasure gold coins will be making its way to the market. A single coin from the hoard will be auctioned for the benefit of the San Francisco Museum and Historical Society, after which the balance of the hoard will be made available for sale on Amazon.com

When the discovery of the hoard was made public earlier this year, the story captured world wide attention. A couple taking their dog for a walk in February 2013 came across a canister jutting out of the ground at the edge of the trail. After digging out the can with a stick, the couple carried it back to their home where they found it to be filled with $20 gold pieces. Returning to the site, they unearthed a total of eight cans which contained 1,427 U.S. gold coins with a face value of $27,980 and estimated market value of more than $10 million. 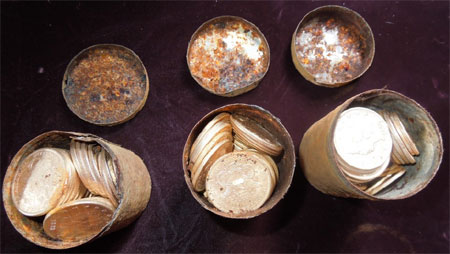 The initial evaluation of the find was performed by Numismatist David J. McCarty of Kagin’s Inc., who informed the couple of the significance of the discovery. The coins were subsequently conserved by McCarthy and Kagin’s and sent to the Professional Coin Grading Service (PCGS) for independent authentication and grading. The coins were encapsulated with special gold colored foil labels with a pedigree designation “Saddle Ridge Hoard”.

The Saddle Ridge Hoard, named after a geographic feature close to the discovery site, includes 1,373 $20 gold pieces, 50 $10 gold pieces, and four $5 gold pieces. The majority of the coins were struck at the San Francisco Mint and dated between 1855 and 1894. One of the most significant aspects of the hoard is the number of pristine condition coins included with at least fourteen finest known specimens represented. The hoard is believed to be one of the greatest treasures ever unearthed in the United States. 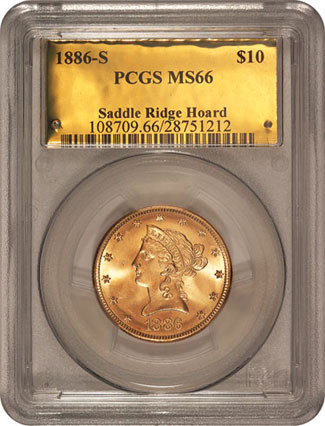 At the fundraiser, there will be 60 coins from the Saddle Ridge Hoard on display including the 1866-S No Motto $20 Gold Double Eagle. This will represent the largest number of coins from the hoard that have been seen together publicly.

Following the auction, the balance of the coins from the Saddle Ridge Hoard will be made available for sale live on Amazon.com

Approximately 90% of the coins will be made available on the Amazon.com website

representing the first hoard of major historical significance to be offered outside of traditional numismatic channels.