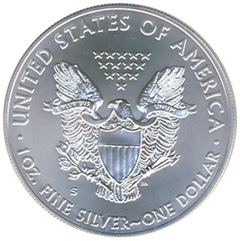 Reversing an earlier indication, the United States Mint has decided not to offer a 2012 American Silver Eagle Uncirculated Coin with the “S” mint mark.

The Mint had released a 2011 Uncirculated Silver Eagle with the “S” mint mark as part of the 25th Anniversary Set, which was released on October 27, 2011 and sold out of its maximum mintage of 100,000 sets within hours.

The following passage within the Deputy Director’s Letter included in the United States Mint 2011 Annual Report indicated that a similar coin would be offered for 2012 (emphasis added):

Our new products for 2011 also included the unique America the Beautiful Five Ounce Silver Uncirculated Coin, featuring beautiful designs of our country’s national parks and historic sites. We also reprised the West Point mint mark for the American Eagle Silver Uncirculated Coin in 2011 and look forward to expanding this offering to include the San Francisco mint mark in 2012.

Around the same time the Annual Report was released, a survey was distributed to customers which asked for opinions on a special 2012 American Silver Eagle Set, which would include proof and reverse proof coins with the “S” mint mark. Such a set ultimately was released with sales starting on June 7, 2012 and recently concluding on July 5. The decision to offer this special set factored into the decision not to offer an additional uncirculated version with the “S” mint mark.

A statement provided by Michael White of the Office of Public Affairs said: “We ultimately decided to offer the American Eagle San Francisco Two-Coin Silver Proof Set (with both coins featuring the “S” mint mark) instead of a 2012 American Eagle Silver Uncirculated Coin.”