Rutherford B. Hayes was the 19th President of the United States of America. Prior to being elected, he had served in the 23rd Regiment of the Ohio Volunteer Infantry, holding ranks between major and brigadier general, and was noticed positively by his superiors. His Presidency was marked by the end of Reconstruction and the return of the previous Confederate states to home rule, as well as the Great Railroad Strike of 1877 and his opposition to the Bland-Allison Act of 1878, which inflated the money supply and instituted bimetallism, where both gold and silver were recognized as a monetary standard.  In addition, the minting of the 20-cent coin ended during President Hayes’ term in office. 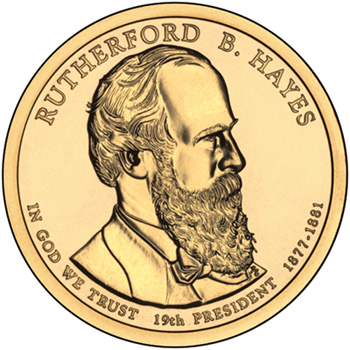 The coin bearing President Hayes’ image is the nineteenth in the series of Presidential Dollar coins, and the third to be issued in 2011 The obverse depicts Hayes, his years in office (1877-1881), order of the Presidency, and the motto “In God We Trust”. The reverse shows the Statue of Liberty in the same design as been depicted on all Presidential dollars. The edge has the motto “E PLURIBUS UNUM”, the year of issuance, and the mint mark.

The Rutherford B. Hayes Presidential Dollar will be release into circulation on August 18th, 2011. The coins will also be available from the U.S. Mint in the following products: