The Central Bank of the Russian Federation has issued (1st March) a collection of four coins to honor various subjects and events in Russian history, noteworthy accomplishments and personalities. 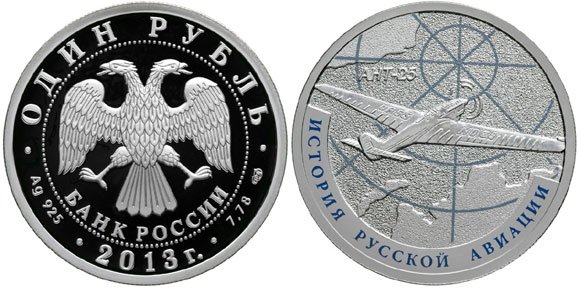 One Ruble:  The first two coins, those for the achievements in Aviation, include two striking airplane depictions in silver along with maps depicting latitude and longitudes coordinates. Depicted are both the ANT-25 and the TU-160. The ANT-25 Tupolev was a Soviet long-range experimental aircraft which was also tried as a bomber. First constructed in 1933, it was used by the Soviet Union for a number of record-breaking flights. 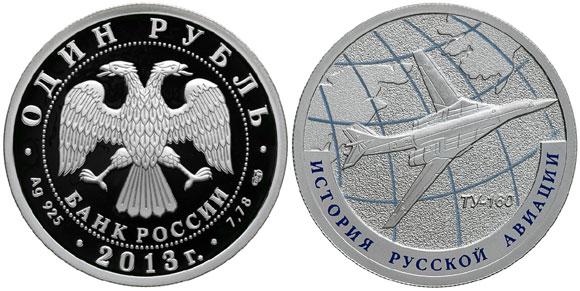 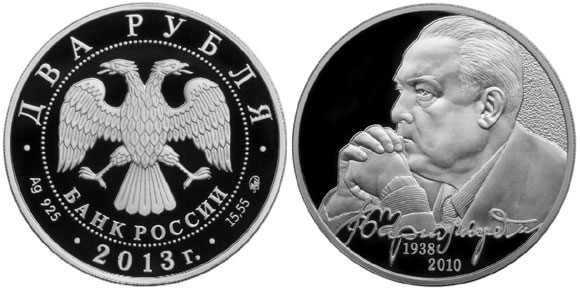 Two Rubles: The coin marks the 75th birthday anniversary of the late Viktor Stepanovich Chernomyrdin (1938 – 2010) who was the founder and the first chairman of the Gazprom energy company. Chernomyrdin was also the longest serving Prime Minister of Russia after the dissolution of the USSR (1992–1998) and Acting President of Russia for one day in 1996. He was a key figure in Russian politics in the 1990’s and a participant in the Russian transition from a planned to a market economy. From 2001 to 2009, he was Russia’s ambassador to Ukraine. After that he was designated as a presidential adviser. The coin depicts Chernomyrdin facing to the left, hands clasped just under his chin along with a facsimile of his signature.

Three Rubles: This coin marks the 350th anniversary of the foundation of the city of Penza, located on the Sura River, 625 kilometers (388 miles) southeast of Moscow. It was founded as a fortress, and to this day, remnants of the sentry line built in 1640 have been preserved at the western edge of the city, and remains of earth ramparts dating from the mid-16th century are preserved in the city center. Until 1663, Penza was a wooden stockade with only a small settlement. Then in the same year, the architect Yuri Kontransky arrived in Penza on the Tsar’s orders to direct the construction of a fortress city. The initial construction consisted of a wooden Kremlin, a village, and quarters for the nobility, small tradesmen, and merchants. In 1774, an insurgent army occupied Penza after the citizens of the city welcomed the rebellious Cossacks. The first stone houses started to appear after 1801, and by 1809 Penza’s population had grown to more than 13,000 people. In 1918, Vladimir Lenin sent a telegram to communists in the Penza area, complaining about the “insurrection of five kulak districts”. This telegram has been used in several historical works on the period and on Lenin. During the Russian Civil War, the Czechoslovak Legions launched an anti-Bolshevik uprising in Penza. During the Soviet period, the city developed as a regional industrial center. Today, The city of Penza with its more than half a million residents is seen as a regional center for higher education with its six universities 13 colleges and 77 public schools. The coin includes a depiction of the monument to the first citizen of the region, a man with the spear and plough standing close by a horse against the background of Penza’s panoramic view and historic structures. At the bottom is the inscription “ПЕНЗА-350” (PENZA-350).

The obverse of all coins includes the emblem of the Bank of Russia, a two-headed eagle with wings pointed downward. Under the emblem is the semi-circular inscription “БАНК РОССИИ” (BANK OF RUSSIA) framed by a circle of dots and inscriptions along the rim – above along the rim is the coin’s denomination in text. To the left side of the year of issue are the indications of the precious metal and its fineness – in the center – the year of issue “2013 г.” (2013), to the right is the fine metal content and the mint mark.

For further information on these coins, please visit the webpage of the Central Bank of the Russian Federation at: http://www.cbr.ru/eng/bank-notes_coins/memorable_coins/current_year_coins/print.aspx?file=130301_eng.htm  The Central Bank does not sell or retail coins directly to the public, the coins are available from a network of authorized distributors internationally.