The Mint of Sweden has issued commemorative coins to mark the Royal Wedding of the world’s first and to date, only female heir apparent (as opposed to an heir presumptive) and her long time boyfriend / fiancé Daniel Westling on the 19th June 2010. 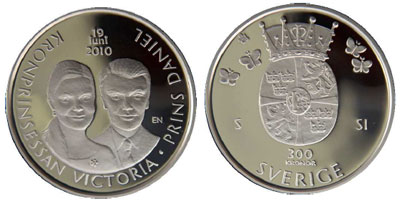 The obverse of the coin portrays the royal couple in full face along with Mr. Westling’s new title as “PRINS DANIEL”. The reverse of both coins carry the Swedish coat of arms along with five butterflies in flight, a symbol of weddings in Sweden, and the coin’s denomination. The Mint has issued a .900 fine gold coin with a face value of 4000 Kronor and a sterling silver coin with a face value of 300 Kronor, the first time for these two new denominations.

Orders are now being taken on the Myntverket’s website at: myntverket.se The website is currently in Swedish only.