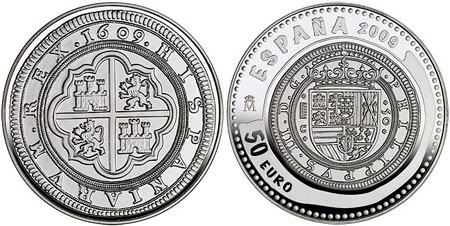 The Cincuentín was the name popularly given to silver coins with a face value of 50 reales. The coins weighed approximately 175 grams, measured about 76 millimetres in diameter, and were struck in the Real Ingenio during the reigns of the monarchs of the House of Austria. On the obverse was the legend with the name of the monarch, followed by the initials “D.G.” (Dei Gratia) surrounding the crowned shield and displaying the coats-of-arms of Castile, Leon, Granada, Aragon, Naples and Sicily, Austria, ancient and modern Burgundy, the Brabant, Portugal, Flanders and the Tyrol. These were flanked by the marks of the assayer and of the mint, the Roman aqueduct at Segovia, and the value “50” in Arabic numbers. The reverse portrayed the arms of Castile and Leon surrounded by the Latin text “Hispaniarum rex” and the year of minting. 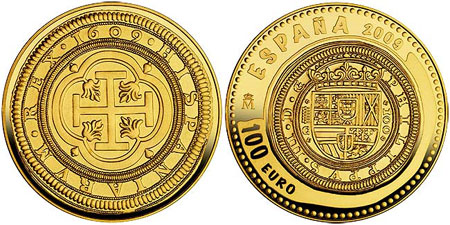 The Centén was minted during the period of the last monarchs of the House of Austria. It had a face value of 100 escudos, a diameter something in excess of 70 millimeters, and the established theoretical weight was 359.19 grams. The coins were used as gifts for high-ranking members of the European nobility. The pieces minted were therefore scant, and sometimes amounted to only a single piece per minting session. The obverse of the coin depicts the crowned shield with the coats-of-arms of the Spanish territories, the mint marks, represented by an aqueduct, and the assayer’s mark with the entwined initials AR belonging to Andrés de Pedrera, and the face value “100”. The reverse features the Cross Potent of Jerusalem, an honorary entitlement held by the monarchs of Spain since the time of the Emperor Charles V.

These coins were minted at the Real Ingenio de Segovia (Segovia Mint), located in central Spain some 90km north-west of Madrid and founded by King Philip II in 1583. Using minting machines acquired from his cousin Ferdinand II, the mint was able to produce circular coins, with almost perfect edges, very unlike the irregular-edged coins that result from the traditional hammer-striking process of the time. The original versions of these coins can reach extremely high prices at auction. A original 100 gold Escudos recently reached €800,000 at an auction held in  Barcelona.

These two modern issues feature full designs taken from the original Spanish coinage on the reverse. The obverse contains smaller reproductions of the original obverse surrounded with modern elements such as face value, country and year of issue and the logo for the Royal Spanish Mint. The 50 euro silver coin is struck from a massive 168.75 grams of 92.5% sterling silver on a huge 73mm flan, while the 100 euro gold-plated silver proof is struck from 168.88 grams of 92.5% sterling silver on a 73mm flan and coated in fine gold plate. Only 6,000 silver and 3,000 gold-plated coins have been released to the worldwide market. The coins are both presented in official mint cases with Certificates of Authenticity.