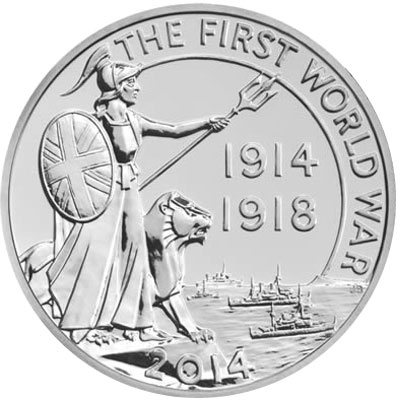 This year’s design, created by John Bergdhal, marks the occasion of the centennial of the commencement of the Great war – later known as World War I. The reverse design depicts the first wave of troops & warships departing Britain, watched over by Britannia, with a lion at her side, guardian of Britain. The design was also chosen for this year’s five-ounce gold and silver proof coins also issued in commemoration of this historic and poignant anniversary.

The obverse of each coin features the current coinage portrait of Her Majesty the Queen by Ian Rank-Broadley FRBS, used on all British circulation and many commemorative coins since 1998 along with the coin’s denomination of “TWENTY POUNDS as part of the legend encircling the portrait. 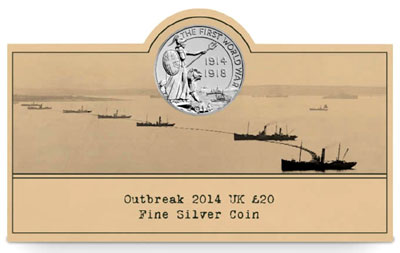 The coin is packaged in a presentation card & cellophane envelope with easily removable coin. In a change from the first issue, the coin is available to international destinations rather than to domestic orders only with a maximum quantity of 5 coins per address.

For information or to order the new £20-for-£20 silver coins, please the Royal Mint product page. Information offered in English – international orders dispatched.