The Royal Mint have unveiled the design and theme for the 2014 £5 crown carrying a royal theme. Next year is the 300th anniversary of the death of Queen Anne, the last Stuart Monarch who reigned from 1702 to 1714. Princess, later Queen Anne was the younger daughter of King James II who was himself deposed by his elder daughter Mary Stuart and son in law, William, Prince of Orange in 1688. Anne’s older sister and brother in law were jointly crowned in 1689 as King William III & Queen Mary II. When Queen Mary II died in 1694, her husband remained on the throne until his death in 1702. It was Princess Anne who succeeded her brother in law as the couple had no living children. Having married Prince George of Denmark, Queen Anne had only one child who survived beyond infancy but died aged 11. As such, Queen Anne died without any surviving children and was the last monarch of the House of Stuart.

Queen Anne is remembered as the monarch in whose reign the political union of England and Wales with Scotland took place creating the United Kingdom of Great Britain and Ireland. Under the Acts of Union, England and Scotland were united into a single kingdom called Great Britain, with one parliament, on the 1st May 1707. Under the terms of the Act of Settlement 1701, the 49 year old Queen upon her death was succeeded by her second cousin George I of the House of Hanover, who was a descendant of the Stuarts through his maternal grandmother. 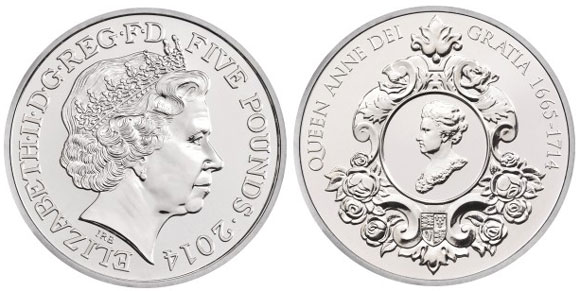 The coin, designed by sculptor Mark Richards, who is the designer of the 2011 Wedding crown of Prince William & Catherine Middleton as well as the 90th birthday of Prince Philip issued also in 2011. The reverse design includes Queen Anne’s portrait styled as an eighteenth-century miniature surrounded by an elaborate frame that incorporates her 1707 Royal Arms. Above the primary design is the text “QNEEN ANNE DEI GRATIA 1665 – 1714” The obverse of the crown coin carries the current portrait of Her Majesty Queen Elizabeth II by Ian Rank-Broadley FRBS and the year of issue, 2014 as well as the coin’s denomination.

The BU cupro-nickel version of the coin is scheduled for release later this year. The £5 coin will be struck in sterling silver, as a silver piedfort and in 22 carat gold and will be available later in 2014.

For more information on this and other coins on offer by the Royal Mint, please visit their website at: http://www.royalmint.com/ Information offered in English – international orders fulfilled.