The Royal Mint have announced (2nd July) that in recognition of the impending birth of the Royal baby expected by the Duke & Duchess of Cambridge, the Royal will present to 2,013 babies born in the UK a silver penny on the occasion of their own birth!

Since the announcement from Buckingham Palace earlier this year that The Duke and Duchess were expecting their first child, the world has been anticipating the arrival of the future heir to the throne. As the Royal Mint has a long history of celebrating special events by creating a new coin to commemorate an occasion, these silver pennies have been struck for this specific event. In a fitting gesture that is also in keeping with an age-old tradition to mark a new birth with a gift of silver for good luck, The Royal Mint is giving babies born on the same day as the future monarch a suitably royal welcome by presenting them with a silver penny struck with the year of their birth. 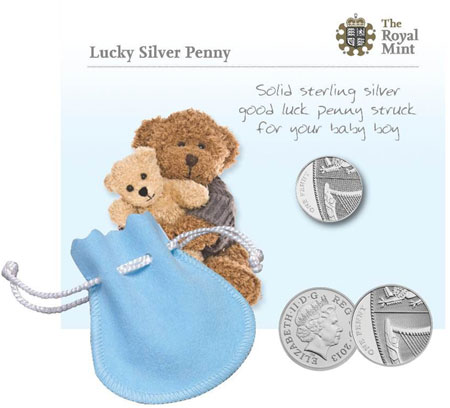 Giving a silver gift to mark the arrival of a new baby is now generally considered to be a keepsake rather than a practical gift for a baby. However, throughout history, “crossing the palm” of a new-born baby with silver or offering them a silver penny was also seen as a way to wish them wealth and good health throughout their life. The silver penny, which comes presented in a beautiful pink or blue pouch, is marked with the year 2013 to commemorate the baby girl or boy’s year of birth and features a shield of the Royal Arms designed by Matthew Dent. The Royal Arms are divided into four parts, England being represented by the three lions passant guardant in the first and fourth quarters, Scotland by the Scottish lion rampant in the second with the harp of Ireland in the third.

Parents of babies born on the same day as the royal baby, who wish to claim their silver penny simply need to visit Facebook.com/theroyalmint and register the birth of their child.  Parents have sixty days following the birth to obtain one of the 2,013 coins that are to be made available by The Royal Mint.