The Royal Mint have announced (13th August) that they have been commissioned to produce a special medal to mark the upcoming NATO summit. From the 4th to the 5th of September, Wales will host the largest gathering of international leaders ever to take place in Britain as the UK hosts the NATO summit. 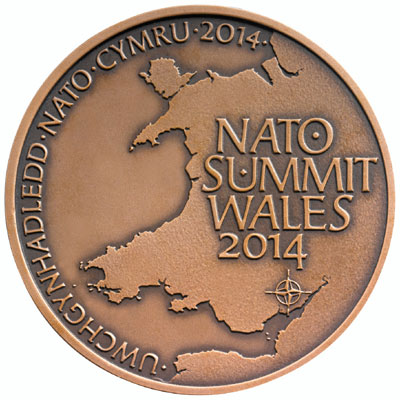 The Royal Mint have produced 157 of the limited-edition pieces which will be and given to every world leader attending the summit as a memento of what is set to be a vital summit in the future of NATO. A piece will also be given to all 57 schools in Newport, Wales as a memento of the special role Newport is playing in the summit. The medals, which are not available for purchase, will be presented to attending world leaders and delivered to schools with some pieces being hand-delivered by summit representatives this September.

Wales Office Minister Baroness Randerson was joined the Deputy Mayor and Mayoress of Newport at the Royal Mint in Pontyclun on the 13th August to see the striking of the final piece. They were also joined by Welsh cadets from across the forces who represented some the schools receiving the pieces. 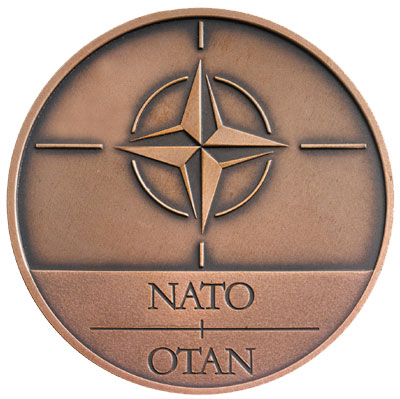 Designed by the Royal Mint’s talented engraver Jody Clark, the 63 mm bronze medal features the iconic map of Wales with ‘NATO Summit Wales 2014’ in both English and Welsh on one side and the NATO insignia on the other. The design was developed using modern computer-aided techniques, and then transferred to a three dimensional model where it was enhanced before bespoke traditional tools were created to strike the special commemorative pieces.

U.S. President Obama, Germany’s Chancellor Merkel, and France’s President Hollande are expected to attend along with leaders and senior ministers from around 60 other countries. The summit comes as NATO draws down from its longest ever mission in Afghanistan and against a backdrop of instability in Ukraine. It is an opportunity to ensure that NATO continues to be at the forefront of building stability in an unpredictable world. The city center Newport will be transformed into a NATO-themed culture and food celebration in honor of the occasion.

For more information on products offered by the Royal mint, please visit their website at: http://www.royalmint.com/ For information on the city of Newport and the NATO summit, please visit: https://www.gov.uk/government/news/host-city-celebrations-brings-nato-summit-to-life