The Royal Mint has announced that a two sovereign set of coins will be offered to interested collectors in limited quantity containing a 1918 dated sovereign and the more recent 2014 dated sovereign, both including the distinctive “I” mintmark – denoting their minting in India on the reverse. 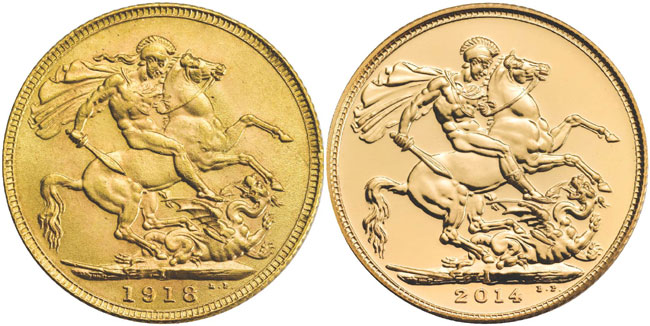 Struck in 22 carat gold, and bearing Benedetto Pistrucci’s classic St George and the dragon design, an original Bombay Mint 1918 Sovereign (circulating standard) and The Sovereign 2014 (bullion standard) are twinned together for the first time in a limited presentation of just 100 sets. One of the world’s oldest coins, with a history that dates back to the fifteenth century and the reign of King Henry VII, minting of The Sovereign was revived as part of a reform of the coinage in 1816 when the British government sought to re-stabilize its currency after the economically ruinous French Revolutionary and Napoleonic Wars. During the 19th Century it became known as the ‘chief coin of the world’, and to this day The Sovereign is globally recognized as a symbol of uncompromising quality standards and minting excellence and remains trusted, traded, respected and admired the world over. 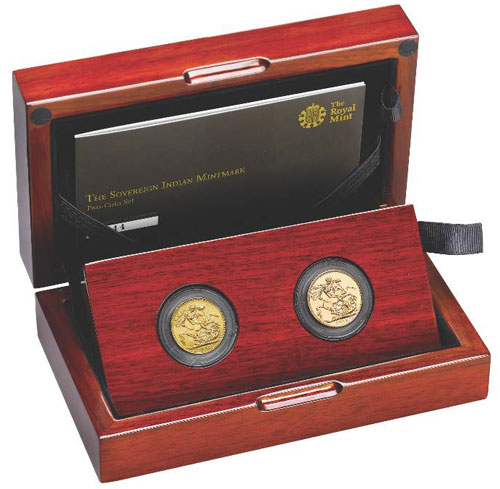 In the early twentieth century as Britain’s influence and prosperity grew, so too did that of The Sovereign. Demand for gold, and especially the gold Sovereign, became so great that The Royal Mint established branches around the world to produce the desirable coin, with one such branch mint opening in Bombay (today known as Mumbai) in 1917. The Sovereign was minted there for little over a year, to the same exacting standards as those produced in London, with dies and tooling equipment shipped overseas to maintain consistency and quality. A small but distinctive ‘I’ mint mark was inserted beneath the figure of St. George and the dragon on the reverse to denote it as a Sovereign that had been struck in India. By 1919 production of all Sovereigns struck in India ceased until 2013 when The Royal Mint facilitated production of The Sovereign in India again for the first time in nearly a century. The partnership with MMTC-PAMP was created last year to help re-establish The Royal Mint in this major market and allow the Indian public to confidently purchase authenticated Sovereigns from a British brand which is renowned for its heritage, high quality and integrity. 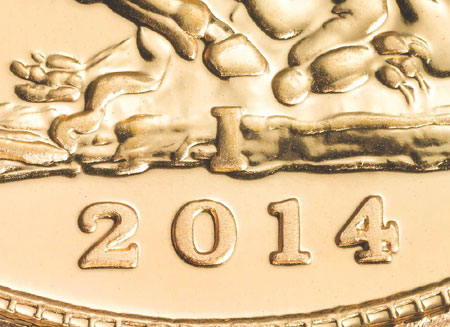 The booklet that accompanies this exclusive set explores the story of the Royal Mint Bombay Branch Mint and the return of Sovereign production to India in 2013 These limited edition coins come with a numbered Certificate of Authenticity and each pair, one contemporary and one classic, bears the distinctive and highly sought after ‘I’ mintmark that only appears on the Indian editions of The Royal Mint’s signature flagship coin.

For more information on these and other coin offered by the Royal Mint, please visit their website at: http://www.royalmint.com/ Information offered in English – international orders dispatched.