The Royal Mint have announced that a series of coins in several metals, denominations and qualities will be minted to mark the christening of the newest member of the British Royal family, that of HRH Prince George of Cambridge.

The baby prince – whose birth was so eagerly anticipated by the world’s media, arrived on the 22nd July of this year. He is the first-born child to HRH Prince William the Duke of Cambridge and his wife Catherine, Duchess of Cambridge. As such, he is in direct line of succession to the British throne, behind his father and Grandfather, HRH Charles, Prince of Wales. With the announcement “Their Royal Highnesses the Duke and Duchess of Cambridge are pleased to announce the christening of Prince George will take place on Wednesday, 23rd October at The Chapel Royal, St James’s Palace.” A program was underway at the Royal Mint to strike a series of coins, the first ever to be produced to mark the occasion of a Royal christening.

The coins are anticipated to have a higher than usual demand for commemorative coins. An earlier coin launched on the 22nd July to mark the birth of the little Prince – a silver crown bearing the Benedetto Pistrucci reverse design of St. George slaying the dragon – sold out in just four days. Seen as the definitive crown coin of the present monarch bearing the iconic reverse design, it had been long awaited by collectors of British coinage since the accession of HM Queen Elizabeth II in 1952.

The new series of coins ranges from a cupro-nickel crown with a face value of £5 to the same sterling silver & gold versions along with silver & gold 5-ounce & kilo coins. Designs were submitted to both Buckingham Palace as well as the baby’s proud parents who approved them personally. Designed by veteran RM numismatic sculptor John Bergdhal, who has undertaken many commissions – most recently, that of the Kilo coins for the 60th anniversary of the Queen’s Coronation. 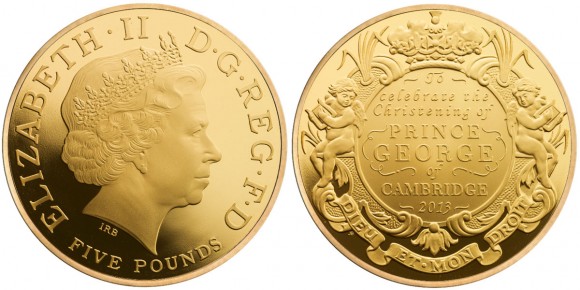 Depicted on the reverse of the series of coins are some of the ornate elements of the Lily font – housed in the Tower of London which plays an important role in Royal christenings. Swags of lilies ornament the inscription, which is flanked by two harp-playing cherubs to balance the design perfectly.  The motto at the foot of the coin is the traditional “DIEU ET MON DROIT” (God and my right) which is the motto of Prince George’s great grandmother, Queen Elizabeth II. The commemorative text in the center of the coin reads “TO CELEBRATE THE CHRISTENING OF PRINCE GEORGE OF CAMBRIDGE 2013” the inscription is arranged in eight lines.

As the earlier Royal Birth coin was sold out in just days, the Royal Mint have opened these coins to pre-ordering and have received thousands of requests. There is also anticipated to be a greater demand for the cupro-nickel version of the £5 coin.The Royal Mint expect to dispatch some coins after the Prince’s christening.

For more information on these and other coins offered by the Royal Mint and to reserve your preferred version of the Royal christening coin, please visit their website at: http://www.royalmint.com/our-coins/events/royal-christening Information offered in English, international orders fulfilled.