The British Royal Mint has began a new series of gold coins in conjunction with the 30th Olympiad to be hosted in London in 2012. The series is inspired by the motto of the Olympic Games: Citius, Altius, Fortius – Faster, Higher Stronger. 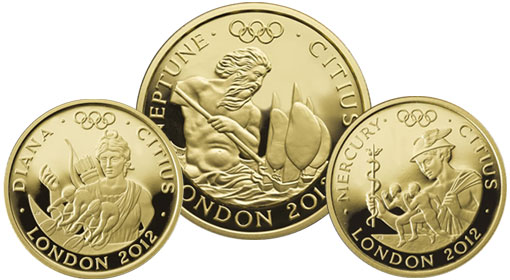 The current gold series: CITIUS – Faster Three-Coin Set includes a £100 coin containing one full ounce of fine gold and two £25 coins containing one-quarter ounce of fine gold, all struck to Proof quality. Three Olympic sports – Sailing, Cycling and Running – are featured on the coins, each paired with a Roman god – Neptune, Diana and Mercury. The designs were created by the British sculptor John Bergdahl.

As with all legal tender UK coins, the obverses feature the portrait of the H.M. Queen Elizabeth II by Ian Rank-Broadley FRBS.

This is the first of a three year series of three coins, the next set will be issued in 2011 and the last in 2012, the year which London will host the Olympic games.