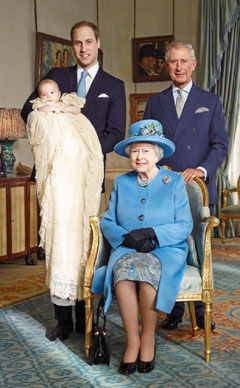 The Royal Canadian mint have launched two coins which celebrate the first birthday of the British (and Canadian) Royal family’s youngest Prince & heir to the throne, that of HRH Prince George of Cambridge – born one year ago on July 22, 2013.

The little Prince, who is the son of HRH Prince William – Duke of Cambridge and his wife Catherine, is also the Grandson of the Prince of Wales and of course, the Great-Grandson of the current Monarch, Queen Elizabeth II. The birthday is also significant as there are presently four generations of Monarch & heirs alive simultaneously which has not occurred since the birth of King Edward VIII in 1894. At that time, his Great-Grandmother Queen Victoria, his Grandfather the future King Edward VII and his father Prince George, the Duke of York, later King George V were all alive to welcome his arrival.

On this occasion, Queen Elizabeth II paid a visit to the new-born Prince at Kensington Palace just days after his birth to learn that her first Great-Grandson had been named George Alexander Louis in honor of her own father, King George VI who had reigned from 1936 to 1952. 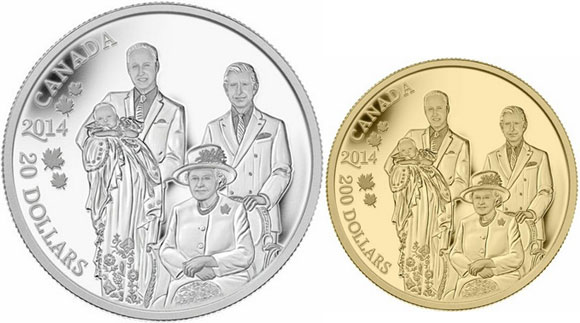 The coins include a portrait of all four generations of the monarchy & succession. Inspired by the baby Prince’s official christening photos taken in October the same year by photographer Jason Bell and designed by Cathy Bursey Sabourin, they depict Her Majesty Queen Elizabeth II seated with the Prince of Wales standing behind her to the right and Prince William holding his young son in his arms who is wearing the christening gown re-created from an earlier gown worn by many of Queen Victoria’s own children. The obverse includes the current portrait of HM Queen Elizabeth II which is used on all Canadian coins since 2003, the portrait is the work of Susanna Blunt.

The coins are officially available from tomorrow and are encapsulated and presented in a Royal Canadian Mint-branded maroon clamshell type box with serialized certificate of authenticity.

For more information on these and other coins offered by the Royal Canadian Mint, please visit the new releases section of their website. Information is offered in both English & French, international orders dispatched.