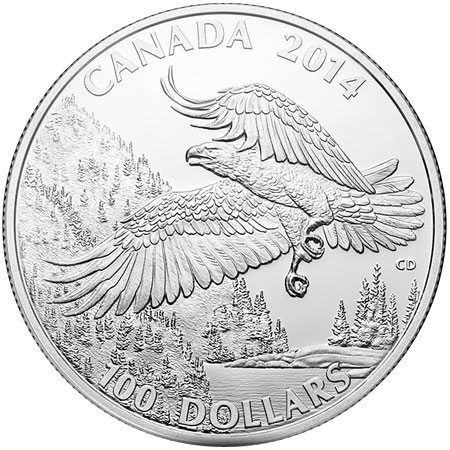 The new release features a reverse design by Claudio D’Angelo depicting Bald Eagle in mid-flight against a natural Canadian landscape. The inscriptions read “Canada 2014” and the face value of “100 Dollars”. The obverse of the coin carries the Susanna Blunt effigy of Queen Elizabeth II.

Each coin is struck in 99.99% pure silver with a matte proof finish and diameter of 40 mm. The maximum mintage is 50,000 pieces with an ordering limit of 3 coins per household imposed.

Previous releases within the series have featured bold depictions of wildlife in motion. A coin depicting a group of three buffalo stampeding across a grassy plain was released in May 2013. This was followed by a coin featuring a grizzly splashing through a river and capturing a salmon in September 2013. Both of these prior releases have sold out.

The Royal Canadian Mint’s “$100 for $100” series follows the success of the ongoing “$20 for $20” series which has offered smaller sized 99.99% pure silver coins for their face value. The concept seems to have resonated with collectors as new releases for both series continue to receive an enthusiastic response and achieve quick sell outs.

For additional information on the 2014 Bald Eagle $100 Silver Coin or to place an order, please visit the Royal Canadian Mint product page.