The Royal Canadian Mint has issued (18th April) a new 5 ounce coin in celebration of the 60th anniversary of the coronation of Canada’s longest-reigning monarch, Queen Elizabeth II. The Mint’s latest offering features Cecil Beaton’s official coronation photograph of Her Majesty in the first application of stunning color on a 5 ounce fine silver coin.

On a rainy Tuesday morning in London, England on June 2, 1953, 26-year-old Queen Elizabeth II was crowned in a glittering and traditional ceremony which is centuries old amid cheers and excited cries of “Long live the Queen!” 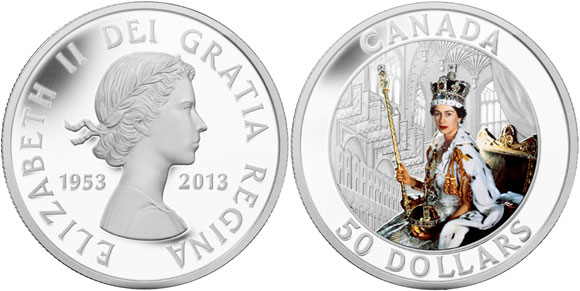 The Mint’s largest coin features a color application process which vividly captures the historic scene of the young Queen in royal robes, wearing St. Edward’s crown and bearing the orb and scepter as she begins her new life as the ruler of the United Kingdom and leader of the Commonwealth. The reverse also features the engraved word “CANADA,” and the face value of “50 DOLLARS.” The RCM engravers used several reference images of the Westminster Abbey to enhance the details in the background of this coin.

The obverse recreates the Queen’s first portrait to grace British and Commonwealth coinage from 1953 which was designed by Mary Gillick and in use on Canadian coinage until 1964. The commemorative years, 1953 and 2013 are placed on either side of the Queen’s portrait along with the legend “ELIZABETH II DEI GRATIA REGINA” which encircles the top portion of the portrait along the edge. Struck to proof quality, the coin is limited to just 1500 pieces.

For more information on this and other coins offered by the Royal Canadian Mint, please visit their website at: http://www.mint.ca/store/coin/5-oz-fine-silver-coin-queen%19s-coronation-mintage-1500-2013-prod1670008 Information is offered in English & French, international orders fulfilled.