The Royal Canadian Mint has started accepting orders for the first coin in a new series of 99.99% silver coins offered at the face value of $50. This follows previous successful programs which have offered smaller and larger sized silver coins at their face values of $20 and $100. 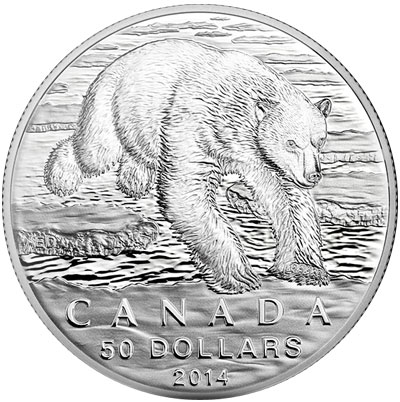 The new release features a dramatic scene of a polar bear within its arctic landscape. Inscriptions read “Canada”, “50 Dollars”, and “2014”. The reverse was designed by Emily Damstra. The obverse of the coin carries the Susanna Blunt effigy of Queen Elizabeth II.

The 2014 Polar Bear $50 Silver Coins are available for sale on the Royal Canadian Mint website, priced at their face value of $50.00 CAD.