The Royal Canadian Mint have launched (9th September) a series of coins marking the 75th anniversary of the first publication of the superhero comic book character “Superman” known all around the world to comic-book enthusiasts as the quintessential “Man of Steel” fighter of crime and upholder of all that is good and moral.

First created in 1933 by writer Jerry Siegel (1914-1996) and Canadian-American artist Joe Shuster, (1914-1992) who were then high school students living in Cleveland, Ohio, the character of Clark Kent, mild-mannered reporter for the Daily Planet with super-human abilities was eventually sold to Detective Comics, Inc. (DC Comics) in 1938. Superman was first published in June 1938 and subsequently made its way into various radio serials, television programs, films, newspaper comics and video games. With the success of his adventures, Superman helped to create the superhero genre and establish its primacy within the now familiar format of the American comic book. 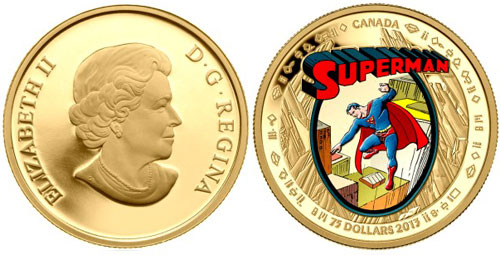 Superman’s story begins on the planet of Krypton and how he found his way to Earth. He was born Kal-El and was rocketed to Earth as an infant by his scientist father Jor-El and his mother Lara moments before Krypton’s destruction. The infant child was later discovered and adopted by a Kansas farmer and his wife and raised as Clark Kent who is and instilled with a strong moral compass and a love of American values and very early on, he begins to display superhuman abilities. Upon reaching maturity, the young Clark resolves to use his super-human powers for the benefit of humanity. Clark / Superman moves to the fictional American city of Metropolis and is hired as a journalist for the local newspaper called the Daily Planet. Superman is plagued by arch enemy and super villain Lex Luthor who is a wealthy, power-mad industrialist of high intelligence and incredible technological prowess. 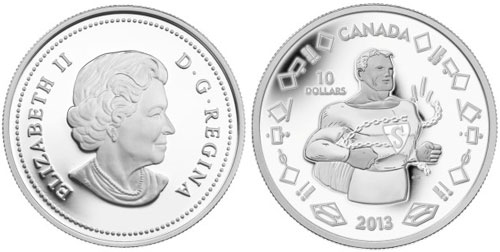 Clark Kent’s love interest is Lois Lane, an award-winning journalist who is also a reporter for the Daily Planet However, despite her intelligence and prowess as a reporter, is fooled by and generally unable to see through Clark’s rather primitive disguise of glasses, and figure out that he is Superman! Together with co-workers, photographer Jimmy Olsen and Editor Perry White, the chronicles of Superman have stood the test of time. Both the format and story has endured through the distractions of television, rock & roll and more recently, video games and computers to continually command a substantial audience of readers over a seven and a half decade time period with those dedicated followers have seen superman through many trials and tribulations along with contemporary changes including marriage to Lois and even being stripped of his powers – which are later restored! 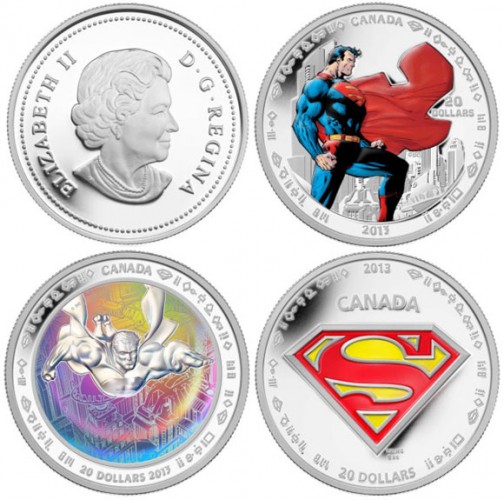 The coins, seven in total include some of the comic strips most familiar images including the iconic “S” seen on Superman’s blue costume and the now familiar SUPERMAN” logo written in comic book style. In an especially remarkable design feat, the Royal Canadian Mint has added Kryptonian lettering which reads “75 years of Superman” to the edge of the reverse design of several of the coins. Launched coins include a gold coin struck in 14 carat fineness, three pure silver one ounce coins with a face value of $20, a 15 dollar & a 10 dollar silver coins and one cupro-nickel 50 cent coin.

Six of the reverse designs either include full color transfer applications of original artwork as part of the overall design, and one $20 silver coin also includes both a color scene and a hologram effect. Struck in proof quality (the 50 cent coin is specimen quality) all coins include the current obverse portrait of HM Queen Elizabeth II as designed by Susanna Blunt and in use on Canadian coinage since 2003.

Please visit the Royal Canadian Mint website for information on these and other coins. Information offered in both English & French, international orders fulfilled.