The Great Lakes situated between the countries of Canada and the United States are the world’s largest system of fresh surface water. Its five lakes, that of Superior, Huron, Michigan, Erie and Ontario – are visible from the moon and hold about 20 percent of the world’s freshwater supply. They were carved out and filled by prehistoric glaciers and cover more than 93,823 square miles or 243,000 square kilometers. This is one of the most biologically diverse regions in North America with more than 150 fish and 50 plant species, some of which are not found anywhere else on earth. 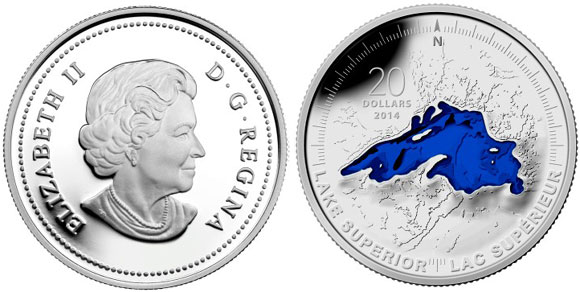 The series begins with the coin featuring Lake Superior. Not only is it the world’s largest freshwater lake by surface area, Lake Superior is also the source of 10 percent of the planet’s fresh water. Lake Superior borders Ontario, as well as the American states of Minnesota, Wisconsin, and Michigan. Fed by 200 rivers, it measures 350 miles or 563 kilometres north to south and 160 miles or 257 kilometres west to east. Its renowned shoreline in Northern Ontario is noted for massive plummeting cliffs composed of ancient rock that hosts some of the world’s oldest fossils.

The reverse design includes as a first time application, raised texture representing land against a translucent enamel filled lake. This coin features an interpretation of the bathymetric depths below the lake surface based on data from the Canadian Hydrographic Service.

The obverse features a portrait unique and distinct to the coins of Canada designed by Susanna Blunt and in use since 2003.

The coin is available by subscription with the remaining coins scheduled for issue as follows: March 2014: Lake Ontario – June 2014: Lake Erie – October 2014: Lake Huron – February 2015: Lake Michigan. A specially prepared collector case is also available with the second coin in the subscription.

Please visit the Royal Canadian Mint website for information on these and other coins. Information offered in both English & French, international orders fulfilled.