The Royal Canadian Mint has launched a new silver collector coin which commemorates the 100th anniversary of the founding of the Canadian Amateur Hockey Association which was the precursor to Hockey Canada. The unveiling took place at the Fairmont Chateau Laurier, Downtown Ottawa which was the venue for the association’s inaugural meeting on the 4th December 1914.

“Hockey is Canada’s national winter game and is played by young and old on frozen ponds and arenas from coast to coast to coast,” said The Honorable Bal Gosal, Minister of State (Sport). “The centennial of Hockey Canada gives us an opportunity to understand and learn more about hockey’s roots in Canada and this stunning coin by the Royal Canadian Mint is a wonderful tribute to a sport we hold dear in our hearts.” 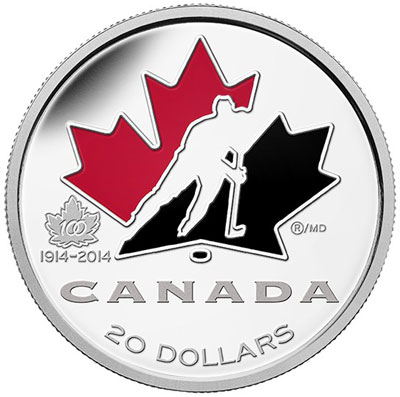 The coin commemorates an important milestone for amateur hockey in Canada. This coin with dual enamel applied celebrates the governing body of the sport in Canada, which has shaped the game as it is played in arenas across the country.

The reverse design includes a red and black enameled maple leaf along with the outline of a hockey player. To the left of the leaf is the commemorative logo of the Hockey Canada anniversary insignia which includes the centennial years 1914 – 2014 as part of the centennial logo. The obverse side includes the current effigy of HM Queen Elizabeth II as used on all circulation and many commemorative coins in Canada since 2003 and designed by Susanna Blunt.

The coin is encapsulated and presented in an officially licensed Hockey Canada paperboard box along with numbered certificate of authenticity. With a total mintage of 7,500 pieces, there is currently an ordering limit of one coin per household.