The Royal Canadian mint have launched a new coin series which will certainly appeal to those lovers of all things Jurassic – with coins dedicated to highlighting the prehistoric creatures found not only on the soil of what is today Canada but to those more well-known four-legged and flying inhabitants of the planet who shared their environs with pre-historic man. The two first coins are focusing on one of the continents more recognizable and the most recent occupant – the woolly mammoth! 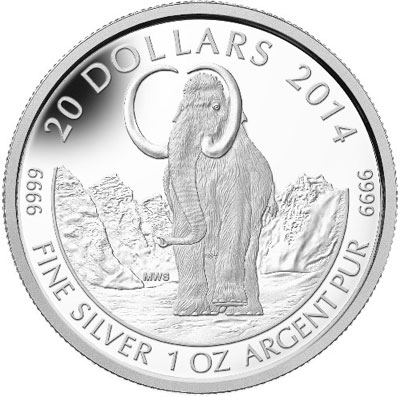 The appearance and behavior of this species are among the best studied of any prehistoric animal due to the discovery of frozen carcasses in Siberia and Alaska. The woolly mammoth was roughly the same size as modern African elephants. Males reached shoulder heights between 9 and 11 feet or 2.7 and 3.4 meters and weighed up to 6 tonnes. Females averaged 8.5 to 9.5 feet or 2.6 to 2.9 meters in height and weighed up to 4 tonnes. A newborn calf weighed about 200 pounds or 90 kilograms.

The woolly mammoth was well adapted to the cold environment during the last ice age as they were covered in fur, with an outer covering of long guard hairs and a shorter undercoat. The color of the coat varied from dark to light. The ears and tail were short to minimize both frostbite and heat loss. It had long, curved tusks and four molars, which were replaced about six times during the lifetime of an individual. Its behavior was similar to that of modern elephants, and it used its tusks and trunk for manipulating objects, fighting, and foraging. The diet of the woolly mammoth was mainly grass and rushes. Mammoths could probably reach the age of 60. Its habitat was the mammoth steppe, which stretched across northern Eurasia and North America or parts of present-day Canada. Despite the species’ extinction 10,000 years ago, the woolly mammoth continues to inspire and intrigue many who identify it with the last glacial period. With these finely detailed coins, the Royal Canadian Mint celebrates this impressive mammal that once roamed parts of present-day Canada and much of the north American continent. 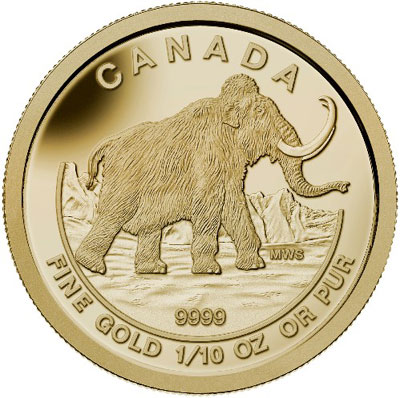 The coins, both designed by artist Michael Skrepnik depicts this majestic creature with two different designs. The coins feature scientifically accurate depictions of a woolly mammoth, verified by paleontologists from the Royal Tyrrell Museum of Paleontology. With its head raised, the mammoth’s trunk is outstretched between its famously long, curved tusks. The thick, coarse fur that enables it to survive the colder temperatures is shorter here, reflecting the moulting that scientists believe took place in the early summer. The mammoth’s extra hump of fat is seen over its shoulders. In the background, the low grasses and gentle sloping hills of the mammoth’s habitat stretches past the image’s outer rim on both sides.

The obverse includes the current portrait of HM Queen Elizabeth II which is used on all Canadian coins since 2003, the portrait is the work of Susanna Blunt.

The two-coin set is available by subscription with only one set allocated per household. For more information or to place an order, please visit the Royal Canadian Mint product page. Information offered in English and French.