The Royal Canadian Mint has announced that an advanced visual security feature will be added to the Gold Maple Leaf bullion coins starting with the 2013-dated releases. This feature will become a permanent addition to the 99.99% pure gold bullion coin.

“The Royal Canadian Mint is committed to delivering outstanding quality and service to its customers by constantly improving its products through innovation,” said Ian E. Bennett, President and CEO of the Royal Canadian Mint. “By introducing an unprecedented visual security feature to our world-famous Gold Maple Leaf bullion coin, we are proud to offer precious metal investors a gold bullion coin which is a world leader in its security as well as its purity.” 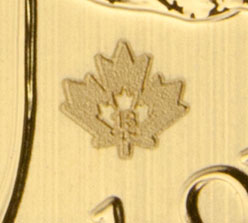 The feature consists of an intricately micro-engraved design produced with laser technology. On a small area of the reverse of the coin, a textured maple leaf is present with the number “13” at the center, which is only visible under magnification. The number “13” denotes the year and will change annually to feature the last two digits of the corresponding year of issue.

The visual security feature is derived from the same technology that was applied to Canada’s 2012 $1 and $2 circulation coins.

The 2013-dated Gold Maple Leaf bullion coins containing the new security feature will begin shipping throughout the Royal Canadian Mint’s network of official bullion distributors in early November 2012. Soon thereafter, the coins will begin to be available from bullion dealers.