By curving the blank and strike, thus creating a dome effect, it seemed only fitting for it to emulate the night sky and feature the well-known Southern Cross. By adding color, a rich iridescent indigo blue to truly capture the essence of the night sky and bring the design to life, the collector is truly transported to the stellar heavens during a magnificent natural show of star-gazing. 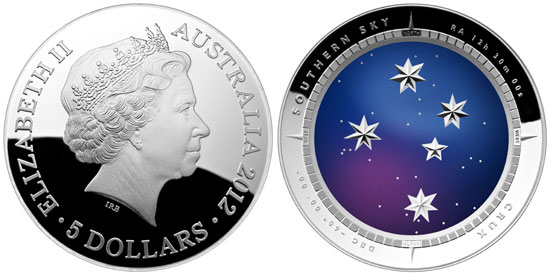 The coin’s reverse design features the Crux constellation, more commonly known as the Southern Cross, there are also navigational markers & co-ordinates bordering the design, which point out where the viewer would face when looking up at the sky to get the best view of the constellation. The obverse of the coin includes the traditional and current Rank-Broadley effigy of HM Queen Elizabeth II which gives a reverse-effect of the coins inward curve.

Struck to proof quality with a face value of $5, the coin is produced in .999 fine silver with a weight of 31.1 grams and a diameter of 39.6 mm. The Royal Australian Mint have authorized a total of 10,000 pieces for distribution. This the first release dedicated to constellations visible in the Australian sky, and in this new age of space exploration, The Royal Australian Mint plan to issue more astronomically themed products in the years to come.

The coin is currently available to collectors, please visit their website at: http://mintissue.ramint.gov.au/mintissue/product.asp?code=310168 international orders accepted.

Coin images are kindly supplied by the Press & Information department of the Royal Australian Mint.