The Royal Australian Mint have launched (26th October) their first commemorative $2 coin which carries the message of Remembrance Day – celebrated each year on the 11th November in the UK and many Commonwealth countries around the world.

Remembrance Day is set aside on the calendar to honor those fallen soldiers who gave their life during the Great War or, more commonly known as World War I. The 11th November was the day when the guns finally fell silent and an armistice was signed on the 11th hour of the 11th day in the 11th month officially ending one of the fiercest wars in Europe. The day is especially revered in the Commonwealth countries as many dominions and colonies within the British Empire sent their soldiers to fight along those of the Mother country with many battles such as Galipoli including more colonial soldiers than European. 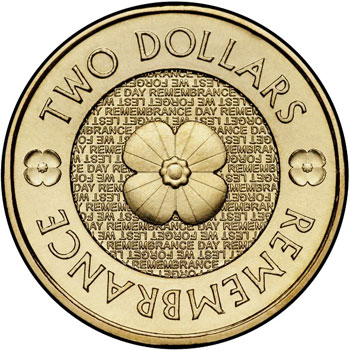 The coin includes the design of a poppy, the symbol of Remembrance day since they appeared in public in 1918 by volunteers who sold hand-made poppies to raise money for wounded soldiers – they have been sold for this purpose from the end of October up to the anniversary day ever since. The coin depicts the symbolic flower in the center with micro-lettering in the background reading “REMEMBRANCE DAY – LEST WE FORGET” repeated in two directions. Around the primary design, the text “REMEMBRANCE – TWO DOLLARS” encircles the center focus. The obverse of the coin includes the circulation effigy of H.M. Queen Elizabeth II sculpted by Ian Rank-Broadley and in use since 1998. 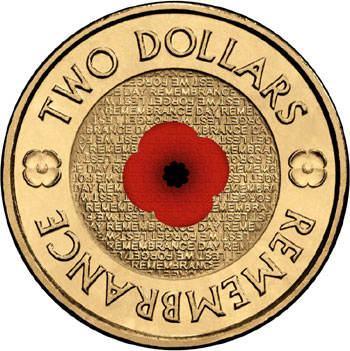 A second version of the commemorative coin includes a colorized version with the poppy shaded a vivid red, also intended for circulation along with the non-colorized example. Both versions are struck in a Copper- Aluminum alloy with a weight of 6.6 grams and a diameter of 20.5 mm. This strike represents the first time that the $2 coin has undergone a change in the reverse design since its introduction into circulation in 1988.

For more information on this and other coins offered by the Royal Australian Mint, please visit their website at: http://www.ramint.gov.au/media/press-releases/2012/20121026.cfm international orders fulfilled.

**Remember, a minute of silence is observed in the United Kingdom, Australia and many other Commonwealth countries on the 11th hour on the 11th November **