On January 1, 2011, the Royal Australian Mint issued a new collector’s dollar with a nostalgic difference. The reverse carries the iconic Merino Ram, which appeared on Australian shilling coins from 1938 to 1963, until Australia introduced decimal coinage two years later. 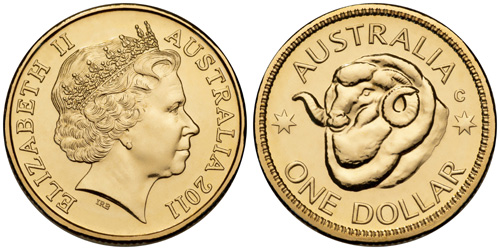 The new $1 ram’s head coin design is part of Australia’s celebration in 2011 of the country’s wool industry and the role it played in the development of modern Australia. The original design of the ram was modeled by the renowned artist George Kruger Gray on a champion Merino at the Annual Sydney Sheep Show in 1932 who later gained national notoriety as the “Shilling Ram”.

The obverse of the coin bears the familiar effigy of H.M. Queen Elizabeth II sculpted by engraver Ian Rank-Broadley and used on Australian circulation coins since 1998.

The aluminum-bronze  dollar coin is struck in brilliant uncirculated quality with a weight of 9 grams and a diameter of 25 mm. This collectible coin is an exclusive offer. It is only available at the RAM store located at their Mint premises and bears a ‘C” mintmark for Canberra.