On January 1, 2010, the Royal Australian Mint celebrated 100 years of Australian coinage with a new $1 coin design featuring four heads. A lucky visitor to the Mint had the opportunity to strike the very first coin of the year with the new design. 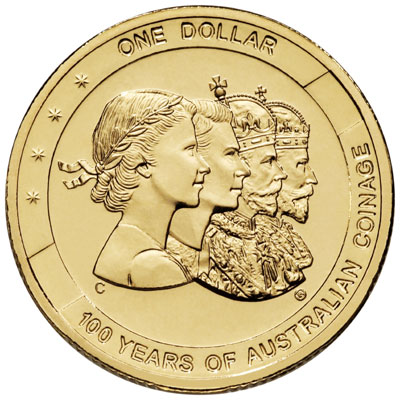 The one dollar coin design features the heads of the four monarchs who have appeared on Australian coinage over the past century. Inscriptions include “100 Years of Australian Coinage” and the denomination “One Dollar”. The four monarchs pictured are King Edward VII (1901-1910), King George V (1910-1936), King George VI (1936-1952), and Queen Elizabeth II (1952-present).

The coin was designed by Vladmir Gottwald and carries the “C” mint mark to denote mintage at Canberra.

Graham Smith the Acting Chief Executive Officer of the Royal Australian Mint said, “This commemoration is a significant milestone in Australia’s history. Along with the new Government and Constitution, the change in 1910, from the British monetary system to our own, heralded the unity and budding independence of our young nation. And this is what we are celebrating in 2010.”

The first visitor to the Mint was allowed to operate the press creating the first coin of the year. A Melbourne coin collector Bruce Mansfield had the honor, and brought home a special memory and collectible coin. The following 99 visitors were also allowed to strike a coin and took home a special prize.

A collectible silver proof version of the coin is available for sale on the Royal Australian Mint’s website, priced at AUD $40.91 (International Price). The coin is struck in 99.9% silver with a weight of 11.66 grams. The mintage of the proof coin is set at 12,500.