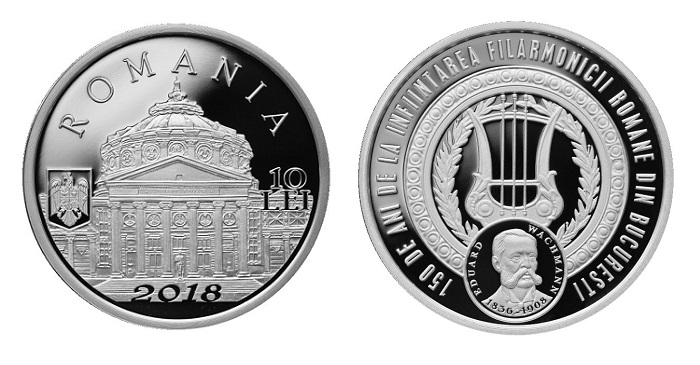 The Banca Nationala a’ Romanei has issued (16th July) new collector silver coins minted in celebration of the Romanian National Philharmonic Orchestra, which observes its 150th anniversary this year. Founded as the Philharmonic Society of Romania on the 15th December 1868, by Eduard Wachmann (1836-1908) — a Romanian conductor, composer, and professor of German origin — his primary aim was to create a national and permanent Orchestra on the same level as the greatest European orchestral associations. Wachmann would spend the next 35 years as the Philharmonic’s resident conductor and director, where he not only succeeded in raising the status of the Romanian Philharmonic to a premier Orchestra, he also successfully developed a new audience that became interested in symphonic music.

In 1907, Wachmann was succeeded as principal conductor and director by Dimitrie Dinicu (1868-1936), who was in turn succeeded by George Georgescu (1887-1964) in 1920. During the time of Georgescu’s directories from 1920-1944 and again from 1954-1964, the repertoire had modernised and the Philharmonic in terms of performing on the international music circuit. It participated in the first tours abroad and invited great world personalities to perform such as Jacques Thibaud, Pablo Casals, Igor Stravinski, Enrico Mainardi, Alfred Cortot, Maurice Ravel, Richard Strauss, Yehudi Menuhin, Herbert von Karajan, and many others of universal calibre. After the Second World War, the Philharmonic diversified their activities with the creation of the Academic Choir, which included a nucleus of soloists such as Maria Kardas Barna (died 2005), who would be a permanent piano soloist until 1971.

With the death of famed Romanian musician George Enescu (1881–1955) — who was regarded by many as Romania’s most important musician, composer, violinist, pianist, conductor, and teacher in 1955 — the Philharmonic was named in his honour and was henceforth known as the Filarmonica George Enescu. The Philharmonic’s 100-year anniversary was celebrated in 1968 with great fanfare and hosted both national and international events, which heightened its profile and prestige even further. Today, the George Enescu Philharmonic is one of Romania’s most respected national institutes with a steady attendance of patrons. With the participation of the George Enescu Foundation, founded in 2010 as a means of promotion and support to the Philharmonic, the association continues to grow in popularity and international reputation. 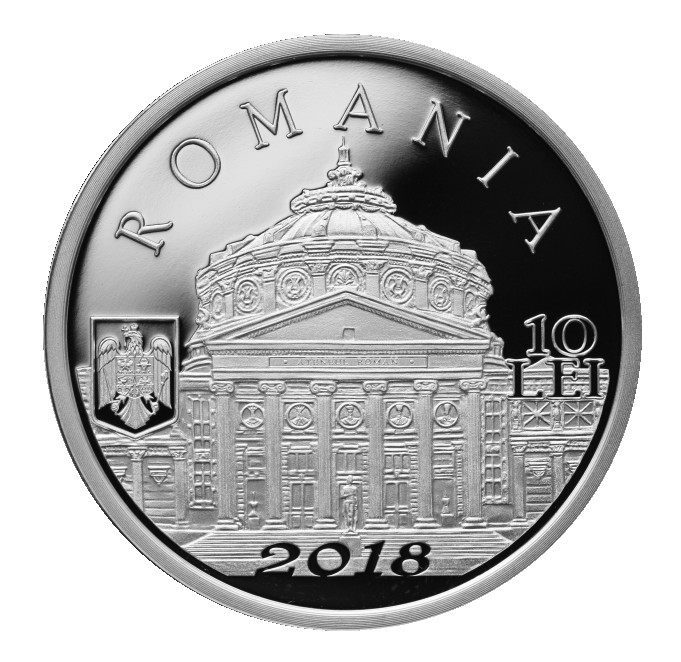 The coins are produced by the Monetăria Statului on behalf of the National Bank of Romania. The obverse includes a detailed image of the Romanian Athenaeum, the longtime headquarters of the Romanian Philharmonic Orchestra in Bucharest. The inscription ROMANIA is placed above the image in an arch shape with the face value of 10 LEI and the coat of arms of Romania placed on either side. The year of issue, 2018, is seen below the primary motif. 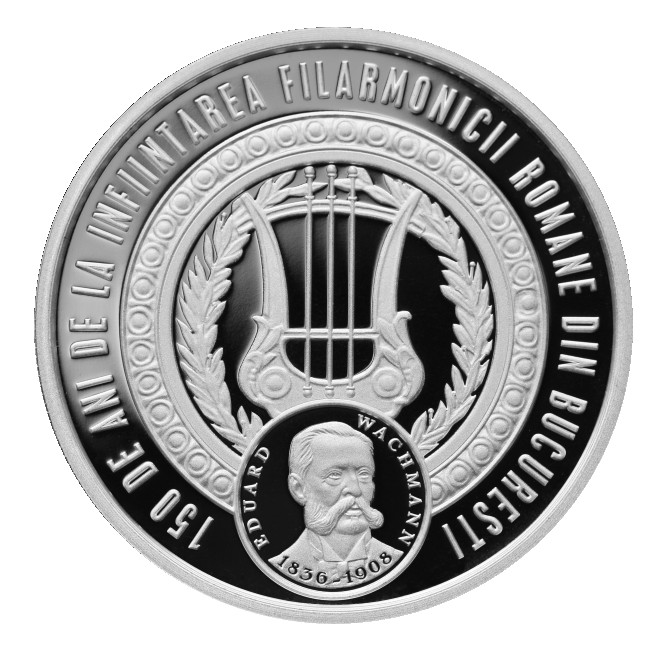 The reverse includes a detail of the building of the Romanian Athenaeum with a medallion depicting a portrait of the first director and conductor, which is placed just below the Athenaeum’s interior detail. The inscription “EDUARD WACHMANN and his birth and death years, 1836-1908, encircle the portrait. The inscription 150 DE ANI DE LA INFIINTAREA FILARMONICII ROMANE DIN BUCURESTI is placed around the entirety of the primary design.

The silver coins are individually housed in transparent plastic capsules and are accompanied by leaflets featuring a presentation of the numismatic issue in Romanian, English, and French. Each leaflet comes with a certificate of authenticity bearing the signatures of the governor and the chief cashier of the National Bank of Romania. The coin is available directly through the Bucharest, Cluj, Iasi, and Timişoara regional branches of the National Bank of Romania.