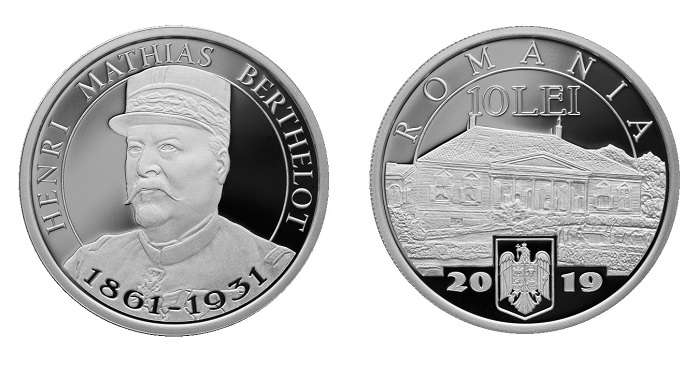 The Banca National a’ Romaniei has issued (22nd April) new collector coins which mark the centenary anniversary of a chapter in Romanian history referred to as the “completion of the Great Union.” Following the conclusion of the fighting in Europe and the official end of the Great War in 1919, a “Great Union” was created. It united traditional Romanian lands and territories under a single government. The addition of vast areas by the-then Kingdom of Romania was achieved as a result of the collapse of both the Austro-Hungarian and Russian Empires, resulting in parts of these territories being reunited with Romania.

With the start of the fighting in 1914, Romania managed to remain neutral for the first two years of the conflict. However, by August 1916, the Kingdom of Romania entered the fighting on the side of the Allied powers of Great Britain, France, and for a limited period, Imperial Russia. As Romanian armies were outnumbered and underequipped, it was inevitable that the Romanian army would be defeated. With the withdrawal of Imperial Russian forces from the fighting in the wake of the abdication of Czar Nicholas II in March 1917, followed by their October revolution, Romania found itself surrounded by the armies of the Central powers of Imperial Germany, Austria-Hungary, and Bulgaria. Despite valiant efforts and notable battles where Romania fought with distinction, their defeat lead to an occupation by the Central powers.

On the 7th May 1918, Romania was forced to conclude the Treaty of Bucharest with the Central powers occupying the capital, becoming the new de-facto government. King Ferdinand, however, refused to sign the treaty but it went into effect despite his refusal to cooperate.

French General Henri Mathias Berthelot (1861–1931) is remembered for his role in “saving” Romania during the Great War by leading the Allied armies from the Danube and succeeded in recovering the Romanian army after their defeats in 1916. Berthelot returned to the Western Front in command of the Fifth Army, located west of Reims during the decisive Second Battle of the Marne.

After the successful Vardar Offensive, which knocked Bulgaria out of World War I in the autumn of 1918, Romania officially re-entered the war on the 10th November 1918, just one the day before the Armistice on the 11th November, which saw a cessation of hostilities in Western Europe. It is due to the efforts of General Berthelot over two years that the Romanian Army was able to return to the fighting with stunning results.

For his gallant efforts in securing a victory for the Romanian crown after the war, Berthelot was awarded honorary citizenship by the Romanian Parliament, and King Ferdinand rewarded him with lands in the Transylvanian village of Fărcădin. The property included a notable manor house, arable land, an orchard, and a forest. In 1926, Berthelot was elected an honorary member of the Romanian Academy, a cultural forum founded in Bucharest in 1866. Berthelot died on the 29th January 1931 and was buried in the town of Nervieux, Loire.

The Monetăria Statului produces the coins at their facilities in Bucharest on behalf of the National Bank. The obverse side includes an image of the mansion of General Berthelot, formerly in the village of Fărcădinul de Jos (present-day General Berthelot), Hunedoara county. The inscription ROMANIA is placed over the primary design in an arch shape with the face value 10 LEI. The coat of arms of Romania and the year of issue 2019 are placed below. The reverse side includes a three-quarter front-facing portrait of Henri Mathias Berthelot, and the image is based on an actual photograph. The inscription HENRI MATHIAS BERTHELOT and 1861-1931, the years of his birth and death, are placed above his portrait in an arch shape.

Each coin is encapsulated and will also be accompanied by a presentation brochure written in Romanian, English, and French. The brochure includes the certificate of authenticity, which contains the signatures of the NBR governor and the central cashier. The launch of the Henri Mathias Berthelot Proof silver collector coins dedicated to the 100th anniversary of completion of the Great Union will be available directly through the Bucharest, Cluj, Iasi, and Timişoara regional branches of the National Bank of Romania.