After a plethora of commemorative half dollars were released in 1936, 1937 was a quieter year, with only two new commemorative half dollars issued with that date. Unlike many commemorative coins dated 1936, those released the following year where actually struck to recognize noteworthy events: the Battle of Antietam in the American Civil War (discussed in a previous article), and the 350th Anniversary of the founding of the “lost colony” of Sir Walter Raleigh on Roanoke Island in present-day North-Carolina. “Roanoke,” as it is generally called, marked the first English attempt to establish a permanent colony on the North-American mainland.

While the commemorative issued in 1937 pays tribute to the 1587 establishment of the “lost colony,” and the birth of Virginia Dare, the story starts a few years earlier, in 1584. That year Queen Elizabeth granted a charter to Sir Walter Raleigh to establish a colony in North America. The Spanish Empire dominated the New World at the time, and Elizabeth hoped that an English colony could become a base to acquire wealth for England, either through direct acquisition or through raids against the Spanish. Raleigh dispatched two expeditions in 1584 and 1585; the first, led by Arthur Barlowe and Philip Amadas, brought back two Native Americans to England, who provided Raleigh with information on the geography and people of Roanoke Island. The 2nd expedition, led by Sir Richard Grenville, lasted longer.

Grenville sailed to Roanoke Island by way of modern-day Puerto Rico in April of 1585. They arrived in mid-August of 1585, building a small fort as they had done in Puerto Rico (nothing remains of either fort). Grenville soon left again for England, leaving behind approximately 108 men, promising to return in April of the next year with supplies and more colonists. April passed, however, and after hostilities with the Native Americans, a visit from the explorer Sir Francis Drake ending in the colonists abandoning the settlement after Drake prevailed upon them to return to England. A small garrison was left behind to guard the fort and to strengthen English claims over the region. 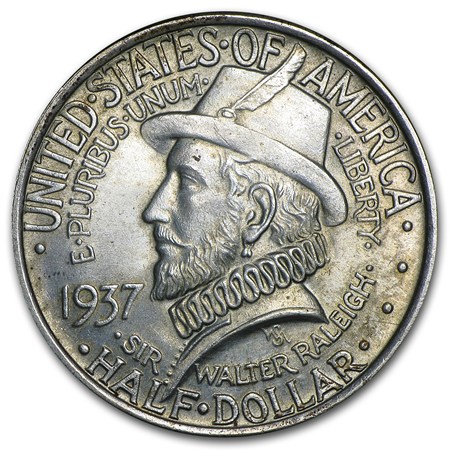 The following year, Raleigh dispatched another group of colonists–115 men and women, led by John White, a friend of Raleigh. The colonists had instructions to return to Roanoke to pick up the remaining Englishmen and continue farther north to establish a new colony at the Chesapeake Bay. When they arrived at Roanoke, all they found was a single skeleton, and no signs of the other men. For unknown reasons they decided to remain in Roanoke and try to establish an English colony there again. John White soon returned to England to urge Raleigh to send more colonists to the New World, as the situation with the Indians had been dire and one colonist had been killed already. Raleigh agreed, but White’s return would be delayed thanks to the Anglo-Spanish War, as there were no ships available to take him back to America.

It would take until the summer of 1590, three years later, for White to return to Roanoke. In 1587, White had left behind the colonists and Virginia Dare, the child of White’s daughter and the first English child born in America. When he returned, he found almost nothing. The settlement had been abandoned, mostly destroyed, and the only signs left of the colony where the words “Croatoan” carved in a wooden post, and “CRO” carved in a tree.

The fate of the Roanoke colonists remains one of the largest mysteries in American history. There have been many theories as to what happened, but nothing credible has ever been found. The word “Croatoan” might refer to a nearby island, where the settlers could have moved, but this is just a guess. As contemporary facts are few and far between, and a search for the lost colonists was not conducted until years later, it is unlikely that we will ever now for sure what happened at Roanoke in the 1580s.

William Marks Simpson designed the coin commemorating the second Roanoke colony in 1587 and the birth of Virginia Dare. A bust of Sir Walter Raleigh is seen on the obverse, facing left, positioned slightly off-center. In front of him is the year of issuance, 1937. Along the upper portion of the coin we see UNITED STATES OF AMERICA, E PLURIBUS UNUM, and LIBERTY. Below the bust is SIR WALTER RALEIGH and HALF DOLLAR. Simpson’s initials are found directly under the truncation of the bust. 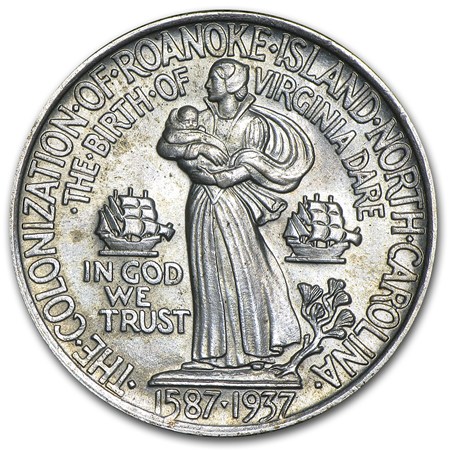 The reverse features Eleanor Dare standing in the center, holding her daughter Virginia. Since no contemporary images of Eleanor or Virginia are known to have been made, the scene is an artist’s impression. On either side of them are two sailing ships, with IN GOD WE TRUST below the left ship. Below mother and child are the dual dates 1587-1937. Surrounding virtually all of the design is THE COLONIZATION OF ROANOKE ISLAND NORTH CAROLINA with THE BIRTH OF VIRGINIA DARE below the top portion.

The Act of June 24, 1936 authorized this issue, with a 25,000 minimum to be produced. Production commenced in January of 1937 at the Philadelphia Mint, and ultimately yielded 50,000 coins. The coins were offered to the collecting public by the Roanoke Colony Memorial Association at $1.65 each, which included 15 cents for postage and handling. Given the fact that the coins were released at the end of a boom in the commemorative market, it should not come as a surprise that the entire mintage was not sold; after sales slowed, 21,000 coins were returned to the Philadelphia Mint and melted. This left a net mintage for the issue of 29,000 coins.

The Roanoke Commemorative Half Dollar is a popular issue with early commemorative collectors, mostly because it commemorates a genuine historical event of local significance. Fortunately for today’s collector, most of the pieces sold were well cared for, and examples are easily acquired up to the MS-66 level. Even pieces graded MS-67 are generally available, although the supply thins out drastically at the MS-68 level, with both PCGS and NGC each having certified only a few dozen examples each.