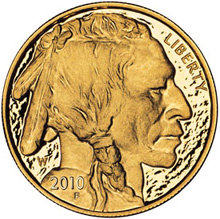 In January 2009, the US Mint adopted a more flexible pricing policy which covered certain gold and platinum numismatic products. Under the policy, pricing adjustments can be made as often as weekly, based on the average price of the metals. The policy covers numismatic versions of gold and platinum bullion coins, as well as the one-half ounce 24 karat First Spouse Gold Coins. The policy does not cover commemorative coins or numismatic products containing silver.

Earlier in the week, the US Mint suspended sales of the 2010 America the Beautiful Quarters Silver Proof Set and the 2010 Silver Proof Set. These products contain coins struck in 90% silver, which yield silver content of 0.90420 and 1.33823 troy ounces for the quarter set and full set, respectively. When last available these sets were priced at $39.95 and $64.95, compared to a current silver value of $38.08 and $56.37. Each of these products were previously suspended and repriced less than a month ago.

Since these products are not covered by the more flexible pricing policy, pricing adjustments are implemented through publication in the Federal Register. This process can take several weeks. In the meantime, the suspension of sales is expected to continue.