The Bank of Latvia have issued a new coin which celebrates the 500th anniversary of Riga Castle, one of the city’s more noteworthy landmarks. An important symbol of Latvia, the Riga Castle marks this prestigious anniversary with a fresh coat of paint and a silver collector coin dedicated to this occasion by Latvijas Banka. The silhouette of the Riga Castle on the right bank of the Daugava river is a characteristic feature of the Riga skyline, which for centuries has been witness to the power and weakness of the city’s rulers. The year 1515 is the accepted date for the construction of the Riga Castle as it is the year that concludes the inscriptions under the stone figures of the Madonna and the Master of the Livonian Order Wolter von Plettenberg (1494-1535) situated above the Castle gate. This same year is also mentioned in written documents about the construction costs. The oldest graphic representations of the completed Castle in views of Riga appear in the years 1589, 1603, and 1612. On the picture of 1612, printed at Nickolaus Mollin’s printing house in Riga, the Castle is represented in great detail, complete with an annex on the north side, fortifications, and the gate tower. In compliance with the provisions of the capitulation treaty after the defeat in the battle near Bukulti in 1491 and to recognize the rule of the Master of the Livonian Order and Archbishop of Riga, the citizens of Riga were obliged to build a castle in place of the former residence of the Master of the Livonian Order, which they had torn down earlier. During the Livonian War (1558-1583), it was in the Castle of Riga that the self-liquidation act of the Livonian Order was signed in 1561. Even though Riga was included in the Polish-Lithuanian State only in 1581, the Castle became the residence of its local potentates.

During the Polish-Swedish War (1600-1629), the battle with uneven success was fought also over the city of Riga, with the Castle lasting even a couple of weeks longer than the city. At the end of the 17th century, the fortifications of the Castle were modernized. During the Great Northern War (1700-1721), capitulation provisions were signed in the Castle in 1710 after a lengthy siege, and in the chapel of the Castle the knights and clergy swore allegiance to Field-Marshal Boris Sheremetyev.

The Governors-General of Riga and later Livland resided in the Castle with the most important reconstruction work at the Castle taking place at the time of Count Georg Braun (1762-1792), Marquis Philip Paulucci (1812-1829), Baron Carl Magnus von der Pahlen (1830-1845), Prince Alexander Suvorov-Rimniksky (1848-1861), and Prince Piotr Bagration (1870-1876). Over time, the outer appearance of the medieval building changed, with the number of usable spaces increasing and residential quarters gradually being filled with various state institutions. During World War I, the residents of the Castle changed several times, and only after the armistice of Strazdumuiža on the 3rd July 1919 did the Latvian flag first fly from the tower of the Castle. The Prime Minister and the State Chancellery moved into the Castle, but in 1922 the castle was designated the official residence of the President of Latvia. During the occupation period, the dankness of the walls and other inconveniences prompted the soviet administration to look for other accommodation and some of the Castle space was turned over to the pioneer organization, an organization for children operated by the communist party whereas the rest of the castle housed several museums.

The towers of the Riga Castle are also important as the location where Latvia’s pre-occupation national red-white-red flag was raised during the period of regaining independence. If the flag of the President is flown, it means that the President is in the Castle, for, in the summer of 1995, it once again became the residence of the President. 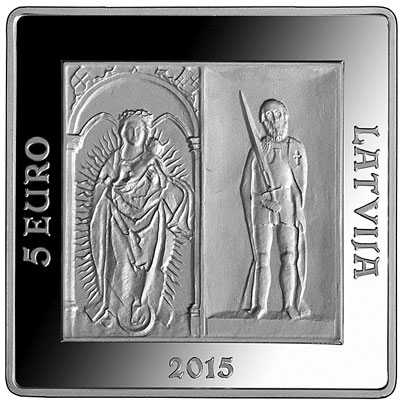 The square-shaped coin, produced by Faude & Huguenin of Switzerland is designed by Artist Ivars Drulle (obverse) and Ilze Libiete (reverse) on behalf of the Bank of Latvia. The obverse design includes the stone mouldings on the gateway of the Riga Castle convent showing the Madonna and Wolter von Plettenberg, the Master of the Livonian Order. The inscriptions 5 EURO and LATVIJA are placed on the left and right respectively, with the year 2015 featured underneath. 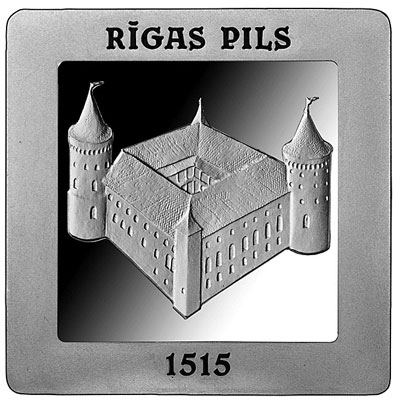 The reverse depicts a bird’s-eye view of a stylized Riga Castle in the center which is topped by the inscription RĪGAS PILS (Riga Castle), while the year 1515 is situated at the lower part of the reverse.

For more information, please visit the website of the Bank of Latvia at: https://monetas.bank.lv/en/coins-for-sale Information offered in Latvian and English.