The Royal Canadian Mint have officially launched (17th April) a new silver coin to mark a personal achievement once thought impossible by one young man with a physical disability. It’s been 25 years since the “Man in Motion” world tour was itself launched by Rick Hansen, then a 28 year old paraplegic who had sustained a spinal cord injury which left him paralyzed from the waist down following a car crash at the age of 15.

Hansen was inspired by fellow British Columbian and Canadian athlete Terry Fox who had lost a leg to bone cancer and undertook the Marathon of Hope, intending to run across Canada from Newfoundland to Vancouver Island to raise awareness for cancer research. Hansen decided to undertake a similar journey for spinal cord injury research. But his planned path was far more ambitious: he planned to circle the world in his wheelchair. The 26-month trek began in March 1985 and ended up logging almost 25,000 miles (40,000 km) through 34 countries on four continents before crossing Canada. He returned to Vancouver to cheering crowds of thousands on 22 May 1987 and raised $26 million for spinal cord research and quality of life initiatives. 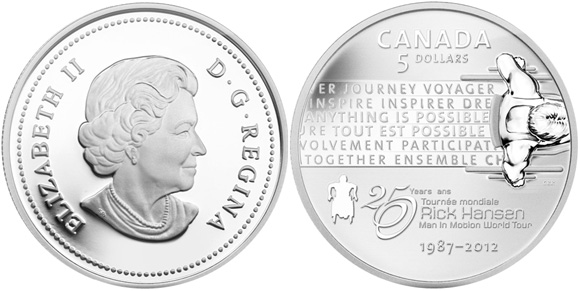 The design of the coin is the work of Chris Reid and Rosina Li and was approved by Rick Hansen. The primary depiction includes a bird’s eye view of Rick Hansen in his chair as he rolls across a road, the words of inspiration which he has been associated with can be seen on the road in finely engraved lines that visually represent the new paths Hansen laid to cut through limiting perceptions of physical disability and his key principles: “journey, inspire, dream, together, involvement,” and, of course, “anything is possible” are repeated across six lines of text. Under the text is an insignia and commemorative inscription of the anniversary along with the years “1987 – 2012”. The face value of five Dollars is placed above the primary design. The obverse features the effigy of Her Majesty Queen Elizabeth II, created in 2003 by Canadian portrait artist Susanna Blunt.

The coin is struck in .999 fine silver to proof quality with a weight of 23 grams and a diameter of 36 mm. A total of 7,500 examples have been authorized for production.

For more on this and other coins offered by the Royal Canadian Mint, please visit their website at: http://mint.ca/