On Jan. 1, 2011 NGC changed its crossover policy, excluding holders from all other companies except PCGS and requiring coins graded by other companies to be removed from their holders and submitted as raw.

At the time Scott Schechter, vice president, said the policy was instituted “to provide submitters with the best possible experience when sending coins to NGC.” The company had received more customer complaints about crossover submissions than any other area.

At the time PCGS was asked if it planned to change its crossover service policy. The company responded that it wanted the best coins in PCGS holders and so would continue considering crossovers from any company.

This post encourages NGC to revert to its old policy and consider coins in any holder, as PCGS does, explaining why doing so is good for the company as well as the hobby.

In 2011, NGC did not intend to slight ANACS and ICG (let alone PCI or SEGS) when it excluded them from its crossover policy, but the result nonetheless implied these were inferior services responsible for customer complaints (at least enough to be excluded).

In any case, NGC’s crossover policy indirectly caused changes in my collecting habits. For instance, I used to collect rainbow-toned silver eagles in NGC holders–primarily for aesthetic purposes–as I preferred the white background over PCGS’s blue label to enhance the focus on patina.

Now I have stopped buying and/or submitting silver eagles in NGC holders because I had to switch my newer crossover acquisitions to PCGS. 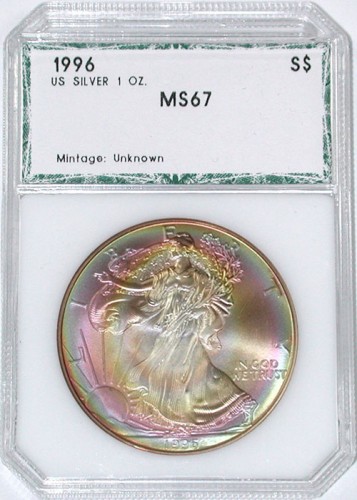 Here is a picture of a coin that successfully crossed over from a PCI holder (labeled 100% white) to the PCGS label. Certain PCI holders tone coins in vivid pastel colors. This particular crossover coin is exquisite. But had I cracked out the coin and submitted it raw to NGC, I would have been risking a “questionable color” designation. In a word, this crossover needed the 100% white PCI label.

So now I collect silver eagles exclusively in PCGS holders. 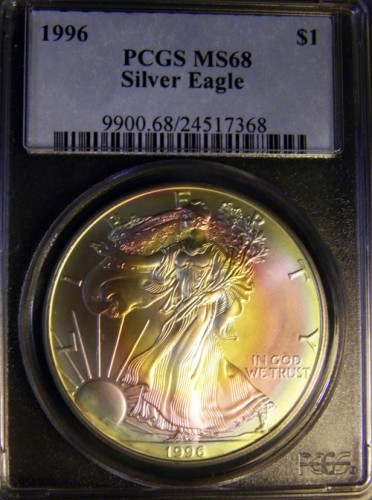 For background, NGC considers PCGS coins in its set regsitres. PCGS excludes NGC from its registries.

Competition in the Morgan Dollar set registry category is particularly keen. Very few coveted key date or semi key dates are available raw anymore. So I typically purchase coins in ANACS, ICG and PCI holders and try to cross them over at the same grade or slightly lower grade to fill or upgrade a slot in my PCGS registry.

I just won’t crack open an 1893-S Morgan VG6 in a small white ANACS holder and submit that coin raw to NGC to upgrade my set registry. I could risk a no-grade. Rather, I’ll send it to PCGS as a crossover candidate. If it makes the grade, I’ll add it to my PCGS set registry. If it doesn’t, I’ll resell it with a reasonable chance of being reimbursed for my initial purchase of that particular coin.

And then there is this: Because PCGS considers crossovers from all companies, including NGC, and because I keep PCGS set registries now exclusively, I have sent my NGC Morgans to PCGS for crossover consideration.

These are the untold consequences of seemingly small policy changes that may not have been thoroughly vetted with hobbyists. By documenting my experience here, perhaps NGC will revisit its policy and re-institute its previous policy of considering crossovers from any company.