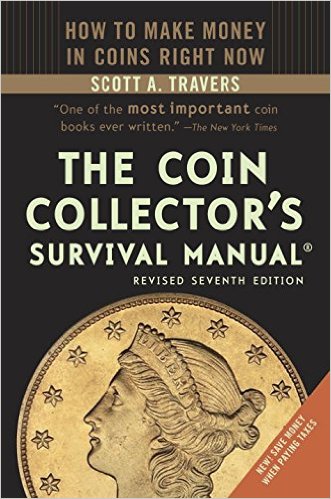 As a coin collector for more than  50 years, I have a very select library. For years, Scott Travers’ The Coin Collector’s Survival Manual was a must-have work that informed and enhanced my numismatic education. Viewers of Coin Update know about my background in coins, including serving as a columnist for Coin World and as a former member of the Citizens Coinage Advisory Committee. Many also know that I am a journalism educator and author of media ethics and technology books, including works by Oxford University Press.

In fact, I am in the process of writing the second edition of an award-winning technology book, Interpersonal Divide: The Search for Community in a Technological Age.

After this review appeared, we were informed that this is not a new edition but an update to the 7th edition published in 2010. It carries a 2015 copyright. It was published by Penguin Random House in September 2015.

So we are clarifying that here. A revised edition is an opportunity to sell the work to a wider audience. So several of our observations still stand. Moreover, we hope that the author understood those observations for the 8th edition, when it appears.

What does this mean now that we have clarified the publishing situation? For starters, this is still one of the few must-have books. If you have the 7th edition, originally published in 2010, then you probably don’t need this one. If you do not own the 7th edition, you should buy it.

First, let me tout why this work is essential. It features a cogent history that truly is a survival manual for novice and apprentice collectors. Some of the highlights, also found in other editions, include these chapters:

Because this was once a numismatic masterpiece, every level of collector and investor can find something to like and inform in each of the 23 chapters with appendices.

However, the savvy reader of Coin Update News, especially a hobbyist with numismatic experience, also may find something outdated or no longer relevant in some of these revised chapters.

For instance, on page 148 in the section on crossovers at NGC and PCGS, Travers leaves the reader with the impression that NGC will consider grading coins from other holdering companies when, in fact, that policy was changed years ago. NGC only considers for crossover PCGS-holdered coins, as Coin Update has reported repeatedly in the past. A typical outdated remark in this section notes that resubmitting coins for crossover or regrade consideration entails little risk apart from the grading fee–“typically $100 when done on a walk-through basis at a coin show.” Really? Assuming membership in NGC or PCGS, which allows for submission rights, you can send in three or four coins for crossover for about that same price.

Check one of my recent submissions: 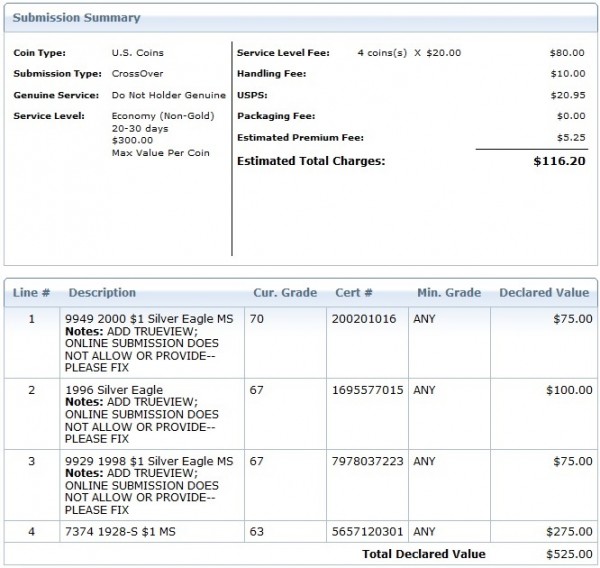 You’ll also note that I am instructing PCGS to fix its online form, which lacks a box for adding TrueView photography. (I just checked the PCGS site and the only additional services you can add in the crossover option are variety attribution and oversized holder.)

We hope the 8th edition of the survival manual will instruct readers on using the Internet for submission purposes, which serves as a permanent record for tax and other purposes.

This has the same ISBN number as the 2010 edition. In that light, the work assumes coin purchases will be made through dealers or at coin shows. There is an outdated 13-page section about buying coins on the Internet, focusing on eBay rather than on the dozens of reputable venues and portals offering coins via Internet and smartphones, from Proxibid to GreatCollections. This chapter of Travers’ book includes a section titled “An Exchange of Correspondence with eBay” that is slanted journalism with leading questions by the author, reprinting of contentious replies and few facts that help any collector “survive” the online coin purchasing business.

As viewers of Coin Update News know, increasingly hobbyists not only are buying coins on Internet but also on smartphones. (Proxibid has just rolled out a mobile phone version still in its development stages.) Moreover, there needs to be a new Survival Guide written by someone who actually uses the Internet to purchase coins, from reading terms of service of auction companies to detecting altered photos of lots. Coingrader Capsule has handled this type of information for years, including these recent posts:

We hope that his 8th edition contains such information.

Additionally, most newer collectors ordering numismatic books look at online reviews of the work before making an Internet purchase. As Travers’ revised book was released in 2015, there are not many current reviews yet on Amazon. The last Amazon review, posted Nov. 9, 2015 and titled “Please Rewrite This Book,” captures the key points of my own review here of the revised seventh edition. Here’s an excerpt:

“Mr. Traver’s book needs not to be revised to be brought up to date, it needs to be rewritten! As other reviewers mention, a lot of this latest edition (revised in 2015) is based on stories and lessons that were set and were relevant 20+ years ago. As I was reading, I kept seeing stories about what happened to this dealer in 1988 or this problem with stabbed coins in 1992. While on occasion he mentions 2015, it feels like this revision was only in the form of some additions written in recent years, NOT a reassessment of what it takes to survive in the coin market of 2015 and a rewriting of the book with that in mind. For example, I’m reading about how to protect my coin collection from a home fire and the book is telling me about the temperature at which my floppy disks (which contain info on my coins) will be destroyed. Floppy. Disks. It is 2015. There are a lot of examples like this, many more specifically about the coin market that are simply outdated. Please rewrite this book.”

The mention of the floppy disk appears on page 334:

I also agree with the above Amazon reviewer’s last sentence for those who lack Travers’ survival manual in their library: “Still, I would recommend buying it.”

I recommend it for numismatic history, grading practices and services, counterfeit detection, fourth-party grading companies such as Certified Acceptance Corporation, and tax and legal advice.

However, if this is the only resource upon which novices depend, they won’t survive if purchasing or bidding on coins online rather than from dealers or at shows. Internet coin buying and selling deserves its own survival manual. That information isn’t in the revised edition.