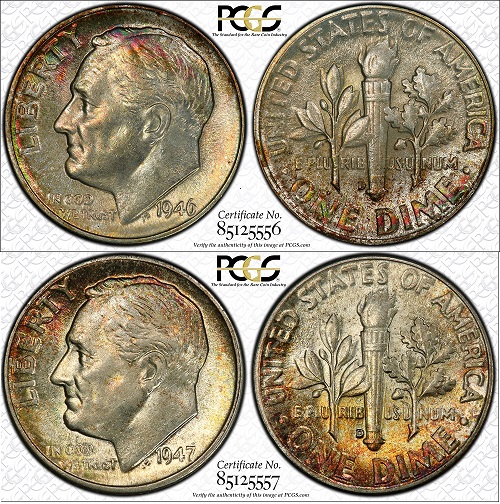 And at MS-62 to 63, we’re basically talking silver melt on these coins.

You can see the clean fields with metal flows showing no marks there, and on the reverse, the upper bands are near split, again with clean fields.

I’m not a grading expert with Roosevelt uncirculated coins, but I do know the standard here is tough, especially with PCGS. All of the other dimes I sent received equally low grades, but these two above and a few other spectacularly toned dimes, would have high hobbyist value if considered choice or gem, or MS-64 or MS-65.

At MS-62 to 63, someone will get a great bargain, as I decided not to crack out and resubmit these coins. Roosevelt grading is especially rigorous, and although I mildly disagree with these grades, I can accept them. The issue with these is strike, and on both, that component is weak. And those marks, however small, do detract.

The issue today–whether to resubmit or live with PCGS grading–needs more explanation before getting into some particulars.

I also have resubmitted coins only to get back the same consistent PCGS or NGC result. I don’t regret the expenditures, either. I consider it education. And those resubmissions have only increased my admiration for the consistency of these world-class holdering companies.

But on rare occasions I do accept the premise that grading is subjective–to a point, literally and figuratively. That’s when I decide to make a challenge.

Because PCGS is so consistent, a frequent submitter like me can usually determine standards by trial and error, especially if that person also understands the company’s grading criteria and utilizes the many resources that the company provides, including videos.

You simply must view this excellent PCGS video presentation titled “Coin Grading 101,” which covers such standards as strike, luster, eye appeal and much more.

You should also study PCGS Photograde Online, one of the best resources on the web.

After years of study, as well as publishing about grading here, I am a fairly good judge concerning when to challenge or live with grades. I have been reporting those results in Coin Update since 2011, and my regular viewers know my skill and, on occasion, lack thereof. This website is the only one that regularly covers holdering companies from a journalistic perspective.

In this post, I’ll discuss some recent resubmissions in the past year. Again, I am cautioning you to keep in mind that some of my challenges fail, and I learn by them, and that I make dozens of submissions, with these being rare exceptions to the consistency of graders.

I won this 1928 Standing Liberty Quarter Dollar with a bid of $140 on Proxibid. It was described as “near gem,” and it did look choice. 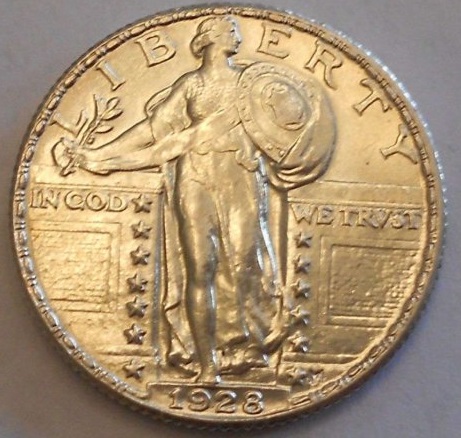 I resubmitted and the coin was deemed MS-62. Here’s the certification of my second submission: #83062669.

This beautiful coin came back “cleaned,” and I thought it should have been graded MS-63 to 64. Its luster was fantastic, and there was no evidence of cleaning, such as hairlines or doctoring, although  at some time in the past the coin might have had a bath in diluted acetone. That probably was the reason for “cleaned,” although that is a stretch. Many Morgans look like this when they shouldn’t because of age and storage.

With a $100 bid, I won a toned 1925 Peace dollar in a PCI holder. Now that presents a challenge! PCGS does not like to grade toned Peace dollars because so many rainbows are artificial. Quite frankly, the silver in that denomination rarely tones or does so in a rusty or spotted way. But that older PCI holder does tone coins, and typically I send those to PCGS as crossovers. (NGC does not consider crossovers except from PCGS.) Also, PCI usually overgrades, at least in comparison to PCGS. But this dollar looked accurately graded at MS64 and I didn’t have any other coins for a crossover submission, so I cracked it out and sent it in.

The coin came back with “Questionable Toning.”

The cert is 84388133 but you cannot check that online, so I’ll share the submission:

We’ll get to the yellow and dark blue underscores later. I resubmitted the 1925 Peace dollar, and it came back graded MS-64: 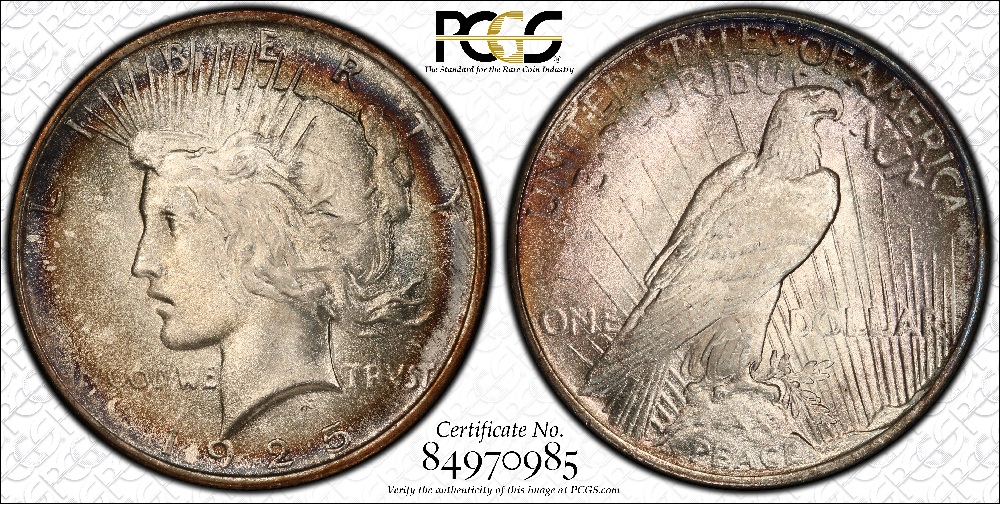 The 1922 Questionable Color Peace dollar, dark blue underscore above, was resubmitted three times with the same result, so I gave up and tried to learn from the experience. This was the third attempt, certification: 84970984.

Here’s the true view of this beauty:

I am going to emphasize again that these are rare exceptions, given the many submissions I make. I promote grading by PCGS and NGC because of their high standards and exceptional consistency.

I have learned by submitting, and I am grateful for both companies.

Before you criticize any of the major grading companies, factor into the equation that I spent more than a dozen years studying how to grade and sharing that with you here and in my other numismatic publications. These truly are exceptions, and it was equally rare to have three in one submission, as above.

Finally, I want to note something concerning population reports. When you crack open coins, you are obligated to send those cracked out labels to the holdering company so that it can adjust its population data.

Review of NGC versus PCGS