The Kennedy Half Dollar has been produced for 50 years, but a series of tweaks and modifications have left the current design with a very different appearance than the original. The original portrait design will be making a comeback within three different numismatic products created by the United States Mint to mark the 50th anniversary of the series. 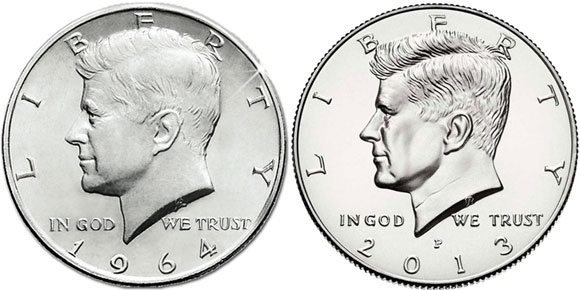 The idea to restore the original portrait came from San Francisco Mint employee Michael Levin. After a brief discussion with Deputy Director Richard Peterson on a proposed Kennedy Half Dollar 50th Anniversary Set, he had sent Peterson an email noting the significant differences in the current portrait design compared to the original design from 1964. He mentioned the changes in the details of the hair and face as well as a reduction in the size of the entire portrait.

His email said, “However well intentioned was the change, it doesn’t depict the real JFK as well as the original portrait.” 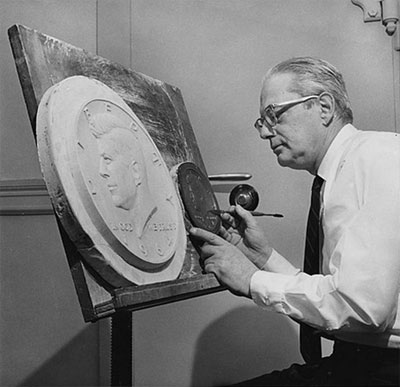 The obverse design of the Kennedy Half Dollar had been created by Chief Engraver Gilroy Roberts based on his previous design for a Presidential Medal. In preparing the Presidential Medal, Roberts had the opportunity to meet with Kennedy and incorporated changes after seeing the President in person. Trial strikes for the half dollar had been shown to Jacqueline and Robert Kennedy, who had suggested slight alterations in the details of the hair. Roberts made changes based on their feedback, creating a portrait true to the President’s appearance in accordance with his widow’s wishes.

Levin noted in his email, “I’m sure that Mr. Roberts, who died in 1992 and was one of the Mint’s greatest Chief Engravers (1948-1964), would have a hard time recognizing his work on the coin today.”

Deputy Director Peterson acknowledged the differences and began the process of exploring a return to the original portrait design. 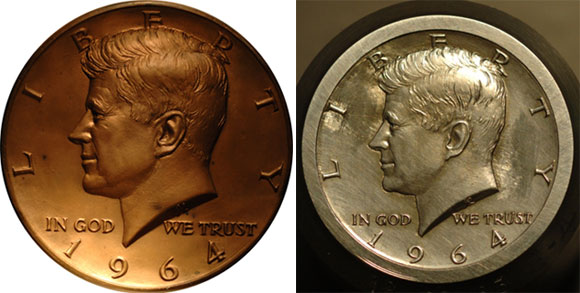 The original plaster sculpt of Robert’s design could not be located, but a bronze galvano for the 1964 Kennedy Half Dollar was recovered from archives. An original die for the 1964 Kennedy Half Dollar dated December 28, 1963 was also located. Both the galvano and die were scanned and digitized. After a new basin was created using the 1964 hub basin curvature, the scan data was converted to match the approximate relief height of the 1964 hub portrait.

The restored portrait design will be used on seven different coins specially issued for the 50th Anniversary of the Kennedy Half Dollar.  The United States Mint has already started accepting orders for the 50th Anniversary Kennedy Half Dollar Uncirculated Coin Set, which includes uncirculated coins struck at the Philadelphia and Denver Mint in the standard copper-nickel clad composition. These sets are priced at $9.95 each, offering the lowest price point of the three products. 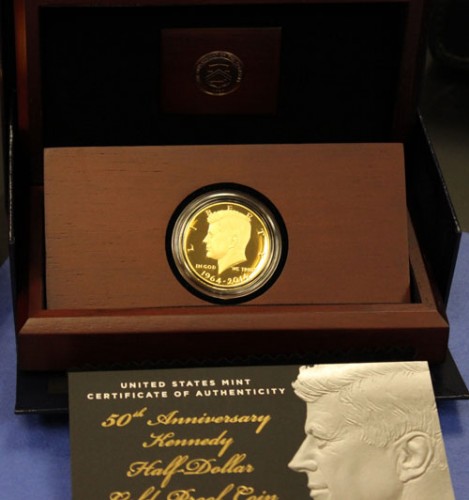 On August 5, the 50th Anniversary Kennedy Half Dollar Gold Proof Coin will be released. Each coin is struck at the West Point Mint in 3/4 oz of 24 karat gold. The coins carry the same diameter and thickness of the standard half dollar. The coins will be priced based on a grid which utilizes the average weekly market price of gold. If gold remains in the $1,300 to $1,349.99 range, the coins would be $1,277.50 each. 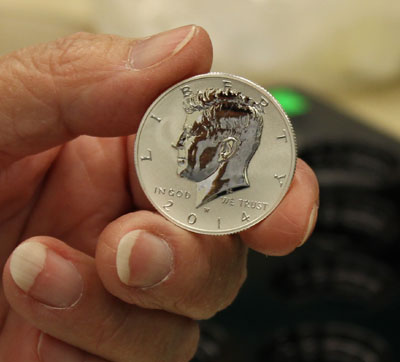 All products carry an initial ordering limit of five units per household and can be ordered at the US Mint’s website http://usmint.gov/catalog or by phone at 1-800-USA-MINT. At retail locations, the 24 karat gold proof coin will carry an initial limit of two coins per person. The gold coins will be offered at the upcoming Chicago World’s Fair of Money held in Rosemont, Illinois from August 5-9, 2014, at the Philadelphia and Denver Mint gift shops, and at the sales desk at US Mint headquarters in Washington, DC.

In recent years, the United States Mint has restored other portraits on circulating coinage to their original designs. 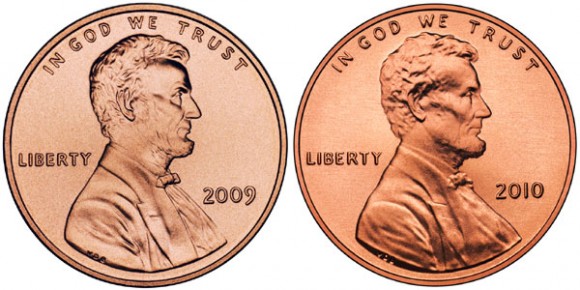 In 2010, a permanent new reverse design was adopted for the Lincoln Cent featuring a the Union Shield emblematic of Abraham Lincoln’s preservation of the United States as a single and united country. To coincide with the new reverse design, the original portrait of Lincoln by Victor David Brenner was restored. Although the obverse design had been used uninterrupted since 1909, it had seen some modification from the original. 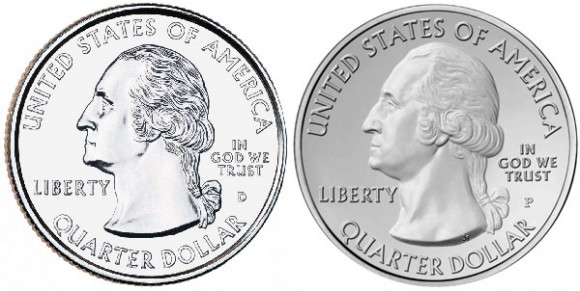 Also in 2010, John Flanagan’s original portrait of George Washington was restored to the quarter. Flanagan’s portrait had been used continuously since 1932, but had seen some significant modification, particularly during the 50 State Quarters Program. The restoration of the original portrait coincided with the start of the America the Beautiful Quarters Program, which features a national park or site from each of the 50 states, 5 territories, and the District of Columbia.

There is still no word as to whether the restoration of Gilroy Robert’s original portrait design for the Kennedy Half Dollar will become a permanent change for the series, or if it will remain confined to the special 50th anniversary products.