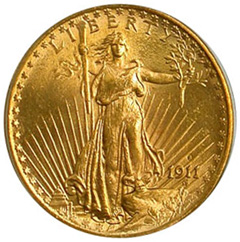 With the surge in gold prices over the past week or so and a lackluster silver price, what have people been actually buying and selling in physical gold and silver products?

My own companies serve three customer niches.  First, we buy and sell rare coins with collectors.  Second, we buy and sell bullion-priced gold, silver, platinum, and palladium coins and ingots with investors.  Third, we are active buyers of gold, platinum, and silver jewelry from the public.  These niches have moved in different patterns in the past week.

The market for non-bullion related rare coins is slow and steady.  It does not seem like we have as many customers for these coins in the past year or so as we did 30 years ago.  Higher gold prices have persuaded some collectors to let loose of some of their gold coins, especially $20.00 Double Eagles.  Other than that, the buying and selling continues at pretty much an even keel.

Our investor customers have been buying like crazy in this past week, but they are buying silver almost to the exclusion of gold, platinum, or palladium.  There has been very little liquidation.

As for the general public, they have been selling jewelry by the droves this past week.  On Tuesday, my companies set a record going back more than 30 years for the most number of purchases from the public in a single day.  We broke that record Wednesday and weren’t that far from another all-time record on Thursday.  The main pieces that customers have brought to us have been gold jewelry.  The amount of silver and platinum jewelry has remained steady.

We talk with dozens of coin dealers around Michigan and the country every day.  They are reporting the exact same pattern of activity as we are experiencing.

On the surface, it would not make sense to have one of our market niches be heavily skewed by customers buying while another niche had heavy customer selling.  However, I think there is a plausible explanation for this difference.

Our investor customers are doing research to understand what is really happening in the markets.  They tend to dig behind the headlines to find out what is really going on.  What they are seeing is a global fiscal crisis that is getting worse every day.  So they want to get rid of their US dollars for precious metals.  I believe they are tilting their purchases toward silver for two reasons.  First, the absolute price of gold is getting high enough that it is more difficult to afford.  Second, by not rising over the past week, silver appears to be the comparative bargain.

I believe that those selling gold jewelry tend to be much less educated on the true financial state of the US and world economies.  They pay attention to the headlines for their information, which tend to paint a rosier picture of the financial markets than they really are.  They are selling us their gold because they see the headlines of record gold prices and are not paying attention to the details of global debt problems.

When all three market niches are combined, times are extremely active for coin dealers.  In the past few days, the average in-store customer has had to wait 10-15 minutes for an employee to be free to serve them.  Normally, they could be served promptly upon arrival. It has been difficult to handle phone calls and keep up with emails.  More than a few lunches have been missed.  Some of us have seen less of our families than normal.  While I enjoy the action, it does make me sad to think of the political malfeasance that is the main reasons why gold and silver prices have soared so much in the past decade.

With all the wrangling going on in political circles around the globe, no one has taken any genuine steps to cure the problems.  In fact, almost every step being taken has the effect of making the problem worse.  Here’s just one example.  Some years ago, the Federal Reserve decided to begin paying a minor dividend to American banks that kept excess reserves.  As a consequence, many banks have been piling up the bailout money in their vaults rather than loaning it to businesses that would create jobs.  If you think like a shell-shocked banker, why take any risk of default when you can at least get a bit of a return from a supposedly safe creditor in the form of the US government.  If the Federal Reserve rescinded paying this dividend, it is almost certain that many banks would become more aggressive loaning money, resulting in the creation of more jobs.  I’m not going to hold my breath waiting for that to happen.

With policies like this being practiced by governments around the globe, the end result is bound to be much higher gold and silver prices in the next year.