The Royal Canadian Mint have launched a new gold coin which marks one of the country’s most important anniversaries, an event which ultimately led to a united Canadian confederation on the 1st July 1867.

Canada will soon be celebrating 150 years of nationhood in 2017, this new coin is commemorating a pivotal step towards Confederation by honoring the 150th anniversary of Quebec and Charlottetown Conferences held from the 1st to the 9th September 1864. Spear-headed by legendary political figures such as Georges-Étienne Cartier and John A. McDonald, these conferences convinced the future Fathers of Confederation that a united, sovereign Canada was possible, thus turning the dream of a Canadian nation into reality. The first time this important national and historic event was commemorated on a Canadian coin – was in 1964 for the centennial anniversary of the conference and a silver dollar was issued. For the 150th anniversary, a $100 gold coin will be issued which has been designed by Luc Normandin. 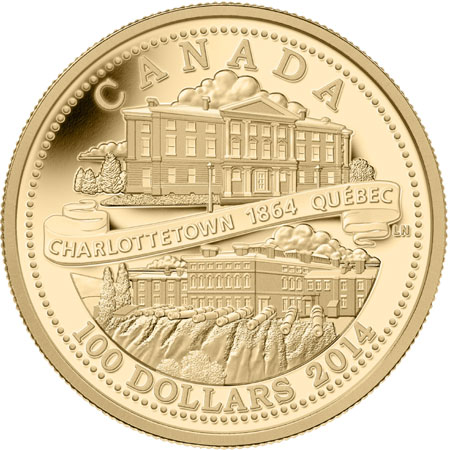 The reverse features finely detailed images of the buildings in which the Charlottetown and Québec Conferences took place, inspired by nineteenth-century engravings. The top half of the design features the Charlottetown Colonial Building – now called Province House. In the lower half of the image, we see Québec Parliament Buildings that stood in the place now occupied by the Château Frontenac. Again bringing to life the intricate detail of the original engraving, this image presents the building from atop a cannon-lined battlement, overlooking the harbor at Cape Diamant. The two images are separated by a scroll featuring the text “CHARLOTTETOWN 1864 QUÉBEC.” The obverse includes a portrait of HM Queen Elizabeth II as designed by Susanna Blunt and in use on all Canadian circulation and commemorative coinage since 2003.

The coin is available for on-line orders and at the three Royal Canadian Mint retails stores in Ottawa, Vancouver and Winnipeg. For more information on this and other coins offered by the Royal Canadian Mint, please visit the new releases section of their website. Information is offered in both English & French, international orders dispatched.