The Royal Canadian Mint have launched (9th May) three new coins which remember one of the battles during the War of 1812 which was considered a turning point in favor of the Royal Navy against American forces.

On June 1, 1813, HMS Shannon, commanded by Captain Philip Broke, clashed with USS Chesapeake just 18 miles east of Boston in a battle which would sway the morale of Royal Navy grappling with a string of recent losses to U.S. warships. Captain Broke and his outnumbered crew’s determination to restore the pride and confidence of the Royal Navy brilliantly defeated and captured USS Chesapeake in one of the bloodiest naval battles of the War of 1812. 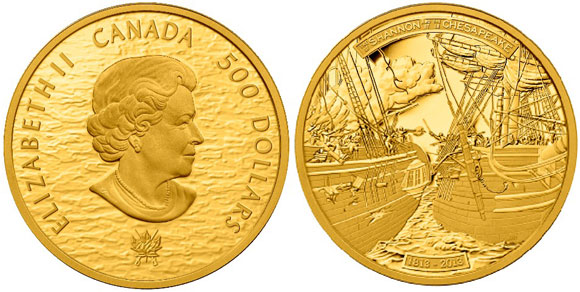 This epic scene of the height of battle is dramatically recreated by artist John Horton on three new coins, one gold, one silver and a very limited platinum issue beautifully preserving this turning point in history. The reverse design, uniform on all three coins includes an intricately sculpted rendition of these extraordinary tall ships, painstakingly depicted to the smallest detail whilst in the midst of battle, each ship, just yards away from one another with sailors shooting muskets and waving swords, its decks ablaze and gun-ports destroyed. The text “THE SHANNON AND THE CHESAPEAKE” (in both English and French) can be seen at the very top of the coin and the commemorative date “1813 – 2013” is placed just under the design towards the middle.

On the obverse, is the well-known Canadian designed portrait of HM Queen Elizabeth II, sculpted by Susanna Blunt and in use on Canadian circulation and commemorative coinage since 2003. The background surface behind the portrait is textured on both the gold and silver issues. The insignia for the war of 1812 bicentenary is seen just under the Queen’s portrait.

For more information on these and other coins offered by the Royal Canadian Mint, please visit their website at: http://www.mint.ca/store/template/home.jsp Information is offered in English & French, international orders fulfilled.