The Central Bank of Ireland have announced (6th September) the upcoming issue of a silver coin that remembers one of the country’s most memorable events which affected future labor relations within the whole country due to the  significant occurrences between labor & management which took place one hundred years ago.

The 1913 “Dublin Lock-out” which began on the 26th August – lasting until the 18th January 1914 and affected more than 20,000 employees and 300 employers. Sparked by the deplorable working & living conditions and long work days tolerated by many laborers, the Lock-out – so called because employers in Dublin locked out their workers, and instead employed casual labor from Britain and elsewhere in Ireland, is often viewed as the most severe and significant industrial dispute in Irish history. With the rise of union organizer Jim Larkin, (1876 – 1947) founder of the Irish Transport and General Workers’ Union in 1908, his slogan “A fair day’s work for a fair day’s pay” became the rallying cry to organize further labor disruption in order to improve working conditions and to implement a fair living wage. Towards the beginning of 1914, the workers whose own benefit the industrial action had been organized for, were on the brink of starvation. A call for further industrial action in other cities in Britain were rejected by similar unions and the lock-out had come to a conclusion with both sides conceding ground on important and relevant issues. The lock-out had achieved some headway in highlighting the ultimate need for better working conditions and wages and, greater activity in labor unions became more prevalent. The lockout itself was also damaging to commercial businesses in Dublin who paid a very heavy price, with many forced to declare bankruptcy. 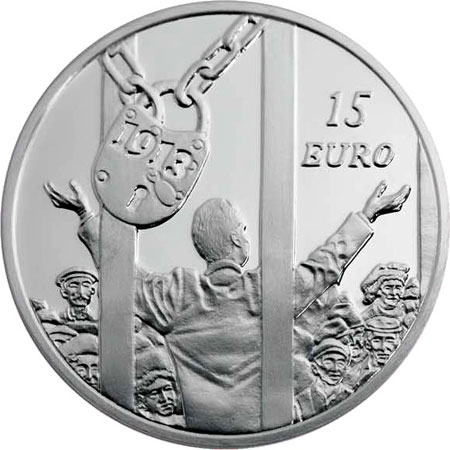 The coin is designed by sculptor Rory Breslin who studied art at the National College of Art and Design as well as in England, France, the Czech Republic and Slovakia. Breslin also co-founded the Head Sculpture gallery in Dublin. The reverse depicts one of the event’s most iconic images, that of Jim Larkin addressing the workers in Dublin. However, the design takes the approach of observing the event from behind the locked bars, complete with padlock and Larkin’s back takes primary position. The padlock itself includes the year “1913” and below Larkin, the crowds of men and women can clearly be seen. The reverse of the coin includes the Irish national insignia of the harp and the text “ERIE” and the year of issue on either side.

Struck by the Pobjoy Mint, UK on behalf of the Central Bank, the coin has a face value of €15 is struck to proof quality and will be available after its official launch on the 24th September. For more information on this and other coins offered by the Central Bank of Ireland, please visit their website at: http://www.centralbank.ie/paycurr/collector/Pages/Coinsets.aspx Information offered in English & Gaelic, international orders fulfilled.

See coverage of the official launch ceremony for the coin and an interview with the designer Rory Breslin.